Here are a couple of photo sheets detailing some of the massive art projects I’ve structured and worked on with various artists. I always try to keep several of these going at once. Good for the heart. You can view more on Leopold Gallery’s Projects Page. Naturally I teach how to land these gigs in Living the Artist’s Life. 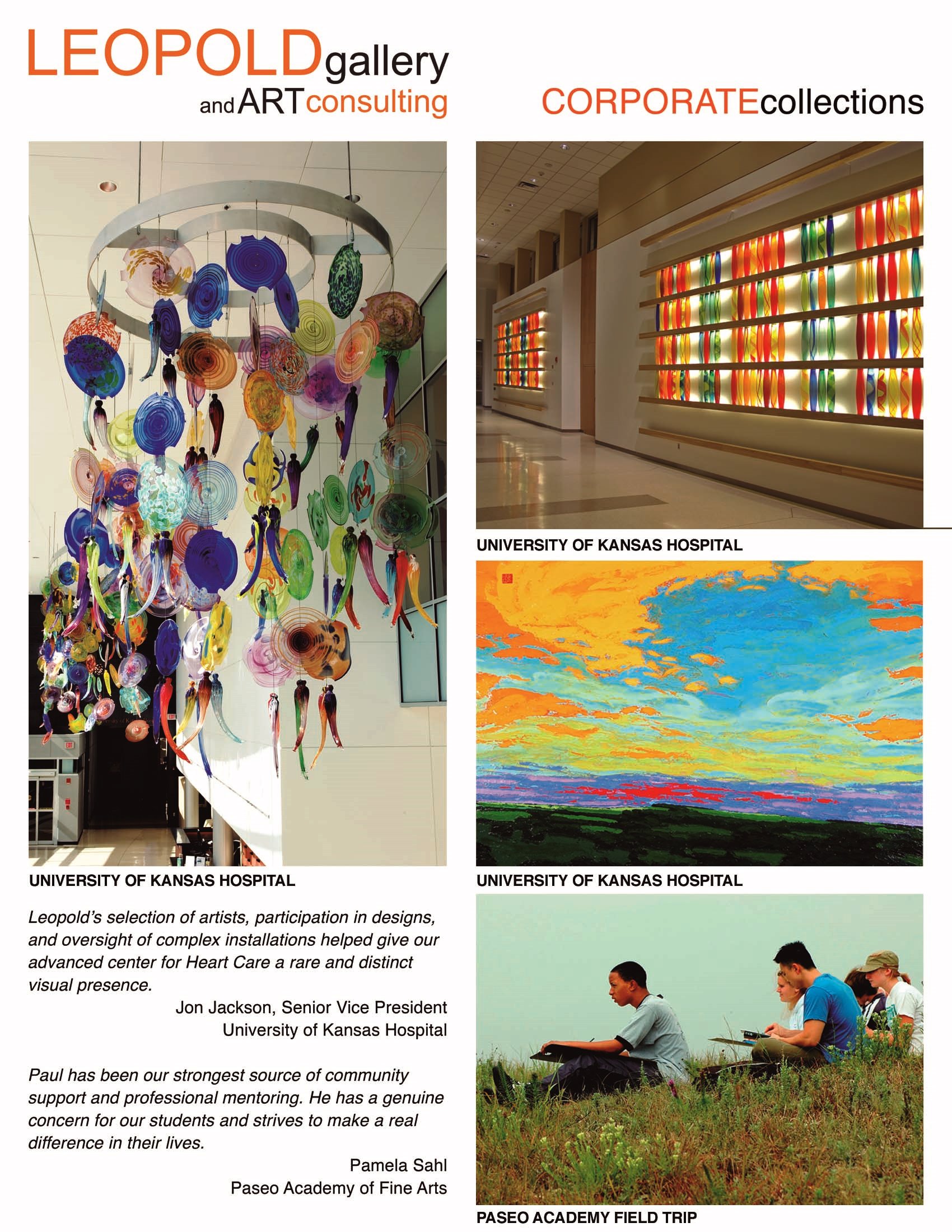 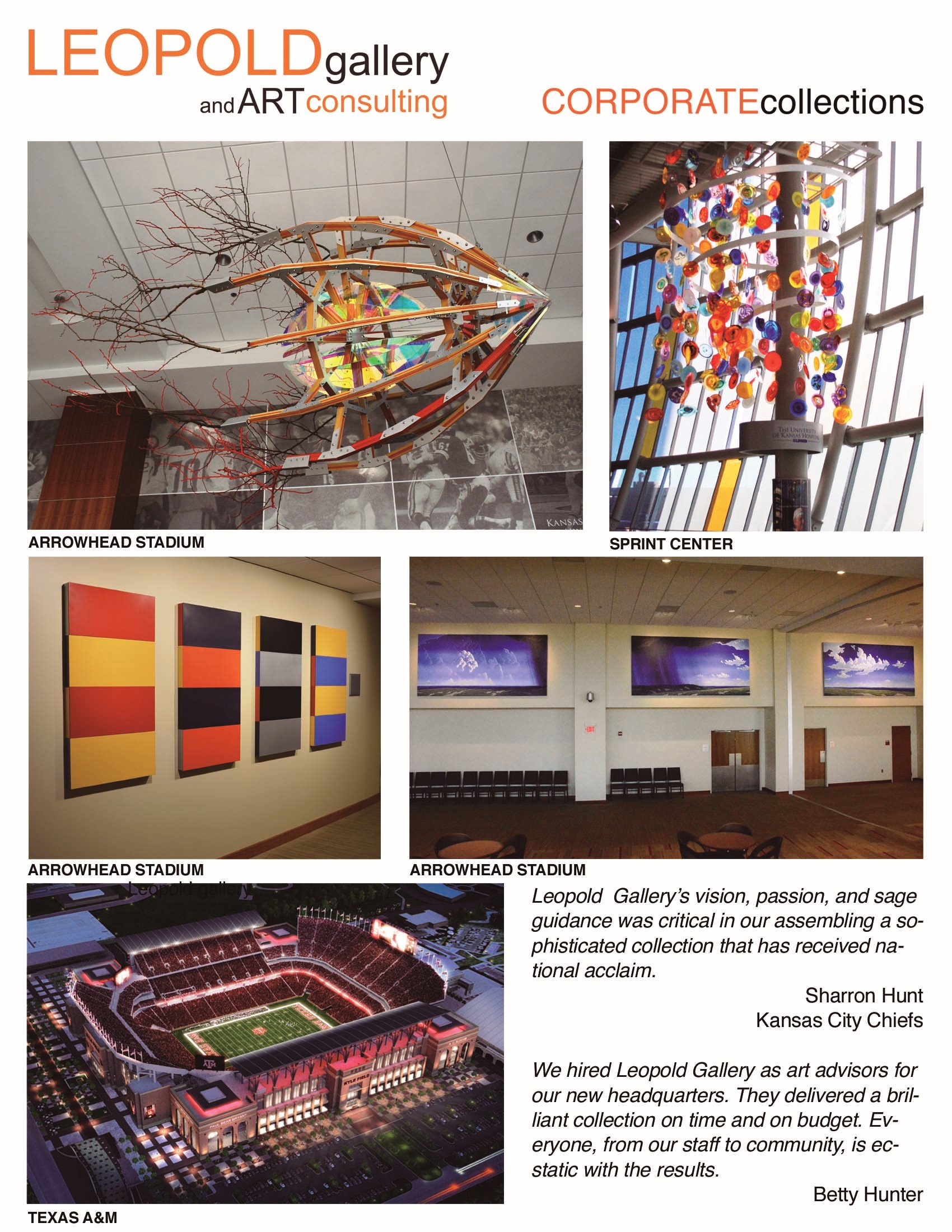 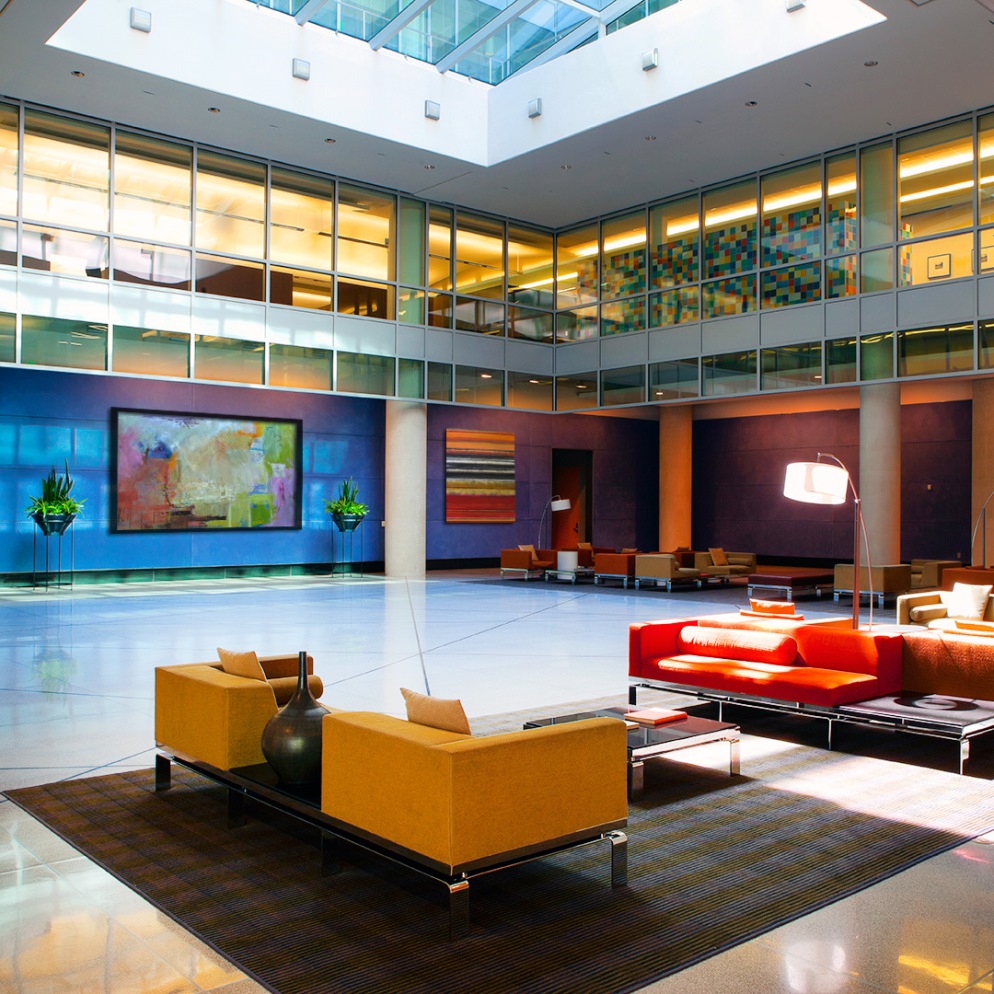 As you likely know, I sell art to scores of corporations, normally in the form of massive art programs. Many corps strike me as incredibly humane and innovative, but unfortunately many others seem to specialize in neurosis and misery, too often run by tyrants. This excerpt from the book addresses some of that, and I feel is particularly relevant in view of all the ongoing corruption in Congress and on Wall Street. I quoted Warren because I feel he addressed one aspect of the issue quite well. And yes, he is quite humane.

CORPORATE CULTURE: THE GOOD, THE BAD, THE CORRUPT
I’ve worked with many corporations that were so open, innovative and humane they shattered all my notions of corporate evil. They paid their employees well, provided great benefits, and encouraged creativity. This vibe emanated from the top down, where the executives were open-minded and made sacrifices on behalf of their people, voluntarily accepting reasonable rather than excessive pay so that revenue could be invested back into the company, and so their employees could realize job security.
I’ve also worked with corporations who were so petty and small-minded that all my notions of corporate evil were confirmed. They paid their employees squat, provided minimal benefits, and stunted creativity through the oppressive regimes they’d devised. As for voluntarily accepting reasonable rather than excessive pay, and protecting the job security of their employees, forget it. Their primary concern was their own compensation, that of the board, and that of the shareholders—no matter what it cost their workforce.
Just as great leadership starts at the top and trickles down, so does misery. It’s my experience that these less humane firms are run by executives who are obsessed with themselves, their possessions, and money. They reflect how the majority of the wealth in most countries is still concentrated in the hands of the few. All countries have historically struggled against this, but lately America has been struggling and losing. How?

In the 1940s, corporations shouldered about 50 percent of the tax burden; now it’s closer to 15 percent. Yet small businesses like mine are hammered with disproportionate taxation that in the early years threatened to shut us down. A lot of this disparity can be laid at the doors of the corporations that have devised complex tax shelters, which their lobbyists got passed into law through the buying of congressional influence, allowing those corporations to shirk their responsibilities while the rest of us footed the bill.
Also in the 1940s, the average executive earned roughly ten times that of a skilled worker. Currently in many firms they’ll earn 200 to 300 times as much, which could not be better exemplified than by the billions of dollars in bonuses that are annually paid out in the financial services industry, whether on Wall Street or elsewhere. Do those people actually earn their bonuses? They’ve argued that they do, but I find the claim suspect when the perks are financed by people like you and me, as they were in 2008, when the Federal government bailed out over 900 corporations, including Goldman Sachs, AIG, and Bank of America. Those companies were all broke, yet their executives had the cheek to collect their taxpayer-funded bonuses—even as many taxpayers were losing their jobs, pensions, and homes.

Consider this a moment, and the lives of excess that money goes to support—the luxury cars, multiple houses, planes, boats, wardrobes, and piles of stuff. I mean, it’s not like the money is going to rebuild our crumbling infrastructure, improve educational standards, or help curb the cycle of poverty. It’s merely going to feed the insatiable demands of a very small group who, by manipulating the system that made their wealth possible, have abused their privileges and in the process prevented the rest of us from attaining a general sort of prosperity that, through honest labor, should be our due.

This issue is addressed below in an article by Robert Frank, an internationally lauded professor of economics at Cornell. The article appeared in the New York Times as I was completing this book.

‘During the three decades after World War II, incomes in the United States rose rapidly and at about the same rate—almost 3 percent a year—for people at all income levels. America had an economically vibrant middle class. Roads and bridges were well maintained, and impressive new infrastructure was being built. People were optimistic.
By contrast, during the last three decades the economy has grown much more slowly, and our infrastructure has fallen into grave disrepair. Most troubling, all significant income growth has been concentrated at the top of the scale. The share of total income going to the top 1 percent of earners, which stood at 8.9 percent in 1976, rose to 23.5 percent by 2007, but during the same period, the average inflation-adjusted hourly wage declined by more than 7 percent.’

If such a high proportion of revenue is being paid to executives at the top, how many jobs within their corporations have been eliminated to help finance this, forcing one worker to perform two jobs instead of one? How many families have been negatively impacted because both parents had to work brutal hours? Millions. This kind of avarice undermines democracy, since it places inordinate power in the hands of an unenlightened few.

Executives of this sort even protect each other’s income, meaning that when one becomes CEO of a major corporation, but performs poorly and is forced to resign, that resignation is often accompanied by an enormous severance package—approved by a board of other executives. Among my clients are two nationally recognized figures who were in circumstances such as this. They were forced to walk after performing poorly, and both did so with severance packages of over forty million each. How is anyone worth that kind of money? And why would any exec be handed a reward when they fail, instead of being forced to hit the streets and earn their keep like the rest of us?

Paralleling this problem is the issue of individual income tax among the super-rich, which Warren Buffet, CEO of Berkshire Hathaway, addressed in a piece he wrote for the New York Times:

‘… while most Americans struggle to make ends meet, we mega-rich continue to get our extraordinary tax breaks… Last year my federal tax bill was $6,938,744. That sounds like a lot of money. But what I paid was only 17.4 percent of my taxable income…
The mega-rich pay income taxes at a rate of 15 percent on most of their earnings but pay practically nothing in payroll taxes. It’s a different story for the middle class: typically, they fall into the 15 percent and 25 percent income tax brackets, and then are hit with heavy payroll taxes to boot.
My friends and I have been coddled long enough by a billionaire-friendly Congress. It’s time for our government to get serious about shared sacrifice.’

I’ve dealt with executives in this class. Many are great leaders like Buffet, using their wealth to make a real difference in the world. Many others are not, having become just as self-serving and destructive as the Robber Barons of the 19th century. FDR faced down people such as this while combating the Great Depression, a mess he inherited and which he summed up with his usual eloquence: “We have always known that heedless self-interest was bad morals; we now know that it is bad economics.”

The demonstrators in New York know the same thing. I joined them for a day at Zuccotti Park, bought an edition of The Occupied Wall Street Journal, and went to one of their meetings at 61 Wall Street. Attended by a combination of intellectuals and stoners, the meeting lacked leadership, an agenda, and clearly defined goals. But everyone knew something was rotten, veiled by layers of complex financial devices like Derivatives, Collateralized Debt Obligations, Credit Default Swaps, and similar practices that enriched insiders while devastating millions of others. They also knew that their future had been sold downstream. What nobody knew was if they could get it back.

Can all this be laid at the door of corporate evil? Of course not. Many entities played a role: lobbyists, members of Congress, and the corporate interests who fought for deregulation of Wall Street in the first place. It took years to create the mess, and will take just as many to correct it. What pisses me off, though, is that many of the culprits knew these practices would harm basically everyone who wasn’t an insider. What pisses me off even more is that so few of them are doing time for what amounted to criminal activity.
When I negotiate with executives of this sort, I sometimes think how few of them could shoulder the load that artists do and maintain these things: humor, dignity, a face of optimism no matter how many times slapped by rejection, a heart of generosity when broke, the ability to return to your calling each day with passion despite no paycheck, and the humility to remain grateful for all you’ve been given. Most of them would crack under the strain, especially the part about no check. But you never betray this when you’re at the table. You just negotiate the deal and try not to judge, even as they rape the system that made them so rich, even as their lobbyists help create policies that may bankrupt your business and family yet not their wealth.

I’ve seen how people of this ilk turn to me with dead eyes and try to get us to design something for free, so we’ll be offered a contract. Then when the contract comes, the terms often have to be renegotiated so that my artists and I can pay our bills, send our kids to college, prepare for retirement (fat chance), support retired parents, and hopefully save a little dough. I love the renegotiation process. But if they can’t be reasonable? I conclude the meeting and split. I don’t put up with that crap, and neither should you.

As for the other type of corporations, run by executives who fill their firms with laughter, mutual respect and camaraderie, who value their employees and pay them accordingly, who value artists and pay what they’re worth, and whose parties are a blast—those are the ones I prefer working with. The others? I work with them too; I just don’t enjoy the process as much. 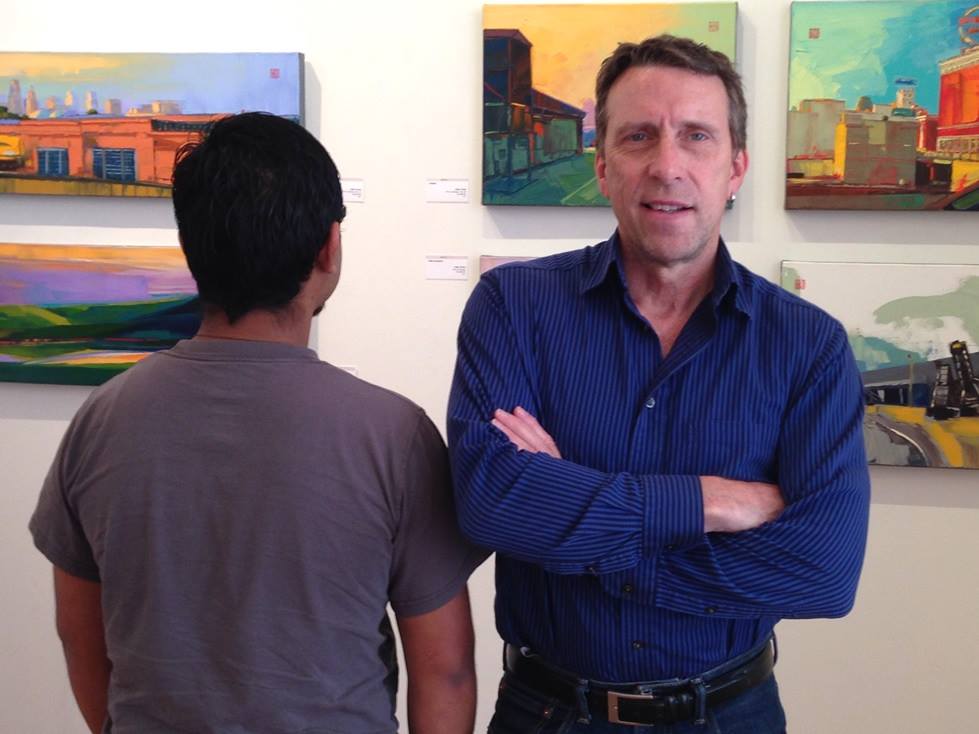 Meet Emilio. His parents brought him here from Mexico when he was a toddler. He grew up in KC, attended a KC high school, made excellent grades, is an exceptional artist, is kind, honest and involved in the community. I’ve been a mentor to him for 5 years. Unfortunately he can’t go to college because of America’s immigration laws. Fine. We’ve started the process for him to get citizenship status. Just like previous waves of immigrants from Russia, Ireland, Italy, etc, he has earned his citizenship. We aim to help him get it so he won’t be sent back to Mexico. Thanks to Jose Faus for sound advice.