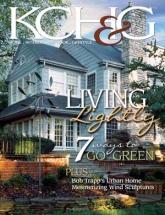 Well-written article, by Kimberly Stern.Â  Even made the cover.Â  Lyman was pleased.Â  So was I.Â  As for now, off to attend a party, sip a little gin, bide time until midnight.Â  Then strings of Black Cats.Â  Other forms of mischief later.

I went into a huddle with good old Matt Kirby recently,Â wherein we discussed a sculptureÂ design for one of the hospitals I’m selecting art for.Â  He came up with this: outdoor installation of stainless steel andÂ cast glass, with a design rooted in Golden Proportion that suggests basketry as well as many things feminine.Â  Client loves it.Â  The piece will be about 12′ tall.

We have to refine it a bit more, research the stresses on the metal, resolve how to attach the glass, etc.Â  Then we have toÂ do one more thing: figure outÂ how toÂ freaking makeÂ it.Â  Well those things will avail, but not until after New Year’s.

Earlier this week Terry Berkbuegler, a principal at Confluence, asked me to go for a walk along the Missouri River.Â  That’s Terry to the right,Â with his assistant Andrew.Â  They wanted my opinion on installingÂ a very large, very interactive sculpture for this portion of Riverfront Park, which the city has hired them to complete.Â  Of course the day we went for the walk it was 15 freaking degrees, but so it goes.

I told them I’d give it some thought and get back to them.Â  What will we do?Â  Actually I’ve been thinking about it for a couple of years, and have already decided.Â  The piece will be enormous, you’ll be able to walk onto it, and it will be unlike anything else in the entire country.Â  But don’t tell anyone downtown; I want it to be a surprise.

Had this Epp installedÂ yesterday at Lewis Rice.Â  Commissioned piece for the main lobby.Â  Several monthsÂ via the creative process, but the client felt it was well worth the wait.Â  So did the gallery owner.Â  Don’t know about the artist.Â  He took the check andÂ split forÂ Tahiti.Â  Tried to tell him that didn’t work out so well for Gauguin, but no one ever listens to that stuff.

These are some of the folks I’m working with on the Saint Luke’s project: architects, contractors, and lighting engineers.Â  What are we discussing?Â  Footings, lighting, gross weights, etc.Â  All this involves two very large sculpturesÂ thatÂ we’ll installÂ next summer.Â  I’d show you what they look like, but preferÂ to notÂ spoil surprises.

Apart from being a great painter, Adolfo’s also a great guy.Â  A new client has stepped forward to acquire one of his pieces.Â  Delivery Friday, details anon.