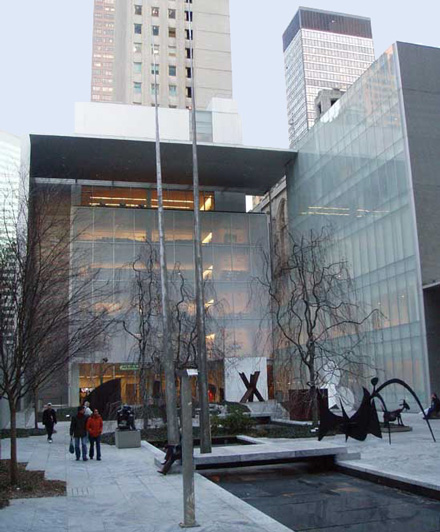 The question below was sent in to one of the magazines I write for.Â  I hope you find it illuminating.

Q:Â  A comment was made in one of my classes about someone’s work being “museum quality,” so now I’m asking, what is museum quality? I’ve seen artwork in museums that left me saying, “Why is that in here?” Also, is there a difference between museum quality and gallery quality?
Â
A:Â  Ah, this is a great mystery.Â  And like many mysteries, there is no simple answer.Â  The definition of “Museum Quality” has changed drastically in the past 150 years.Â  At one time it had its roots in the Renaissance and the Dutch Golden Age.Â  Turner, who I consider the first Impressionist, changed much of that.Â  The French Impressionists, Van Gogh, the Cubists, the Dadaists, the Abstractionists, the Minimalists, and Conceptual Artists changed the rest.Â  Now there are are few rules left, and anyone who has the audacity to challenge the new standard runs the risk of being labeled non-intellectual, so the door is normally left open.Â

This mindset, which itself is rooted in history (different topic),Â led to the National Endowment for the Arts awarding a $20,000 grant in 1989 for a plastic figure of Christ immersed in a jar of urine, a piece otherwise known as “Piss Christ,” by Andres Serrano.Â  This brought about a huge controversy, unnecessarily pitted the NEA against reactionary politicians and religious groups, and caused a very worthy organization to lose much clout overÂ a curiousÂ decisionÂ that manyÂ panel members later expressed regret for.

None of this disturbs me, as I consider myself more an observer than a critic.Â  I’m just laying this out is to let you know that virtually any approach in any medium could be considered Museum Quality these days, as long as there are enough authorities backing it.Â  Some of these works should certainly be acquired by museums.Â  As for those that seem to reflect a dubious level of talent, discipline and skill–I suspect history will solve those issues for us.

So in the end, what is Museum Quality now?Â  It depends on the museum, its curatorial staff, and the works that it values.Â  In some museums, this will be across the board.Â  In others, it will be more traditional.Â  In still others, it will be as radical as possible.Â  To me it’s all interesting.Â  But if you’re asking in regard to landscape and figure, I would say works that reflect originality, that are devoid of sentimentality and cliche, that are more painterly than illustrative, and that look as fresh on the hundredth viewing as on the first.Â  If you’re asking about conceptual work or abstraction, anything that is original, daring, minimal, shocking,Â surprising, or just downright intelligent.Â 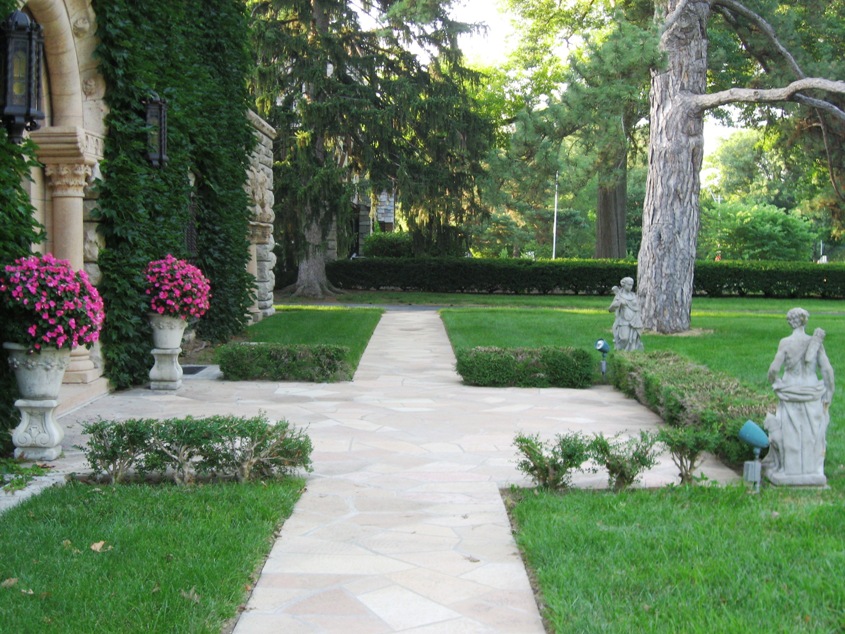 A client and I are trying to decide where to put a grouping of columns by Carol Fleming.Â  In front of the house?Â  Among the pines in back?Â  Where?Â  Actually he knows very well where, as he’s a great architect who doesn’t need my advice in this capacity.Â  He just invited me over so we could visit, talk about his sculpture collection, tell a few jokes. 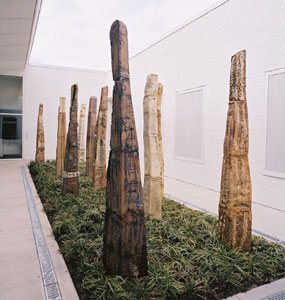 So where will they go?Â  Most certainly not out front, competing with those cast figures–at least not in my opinion.Â Â They need to be by themselves, where they’ll have a more distinct ‘voice.’Â  We’ll see ifÂ my opinion counts for anything later. 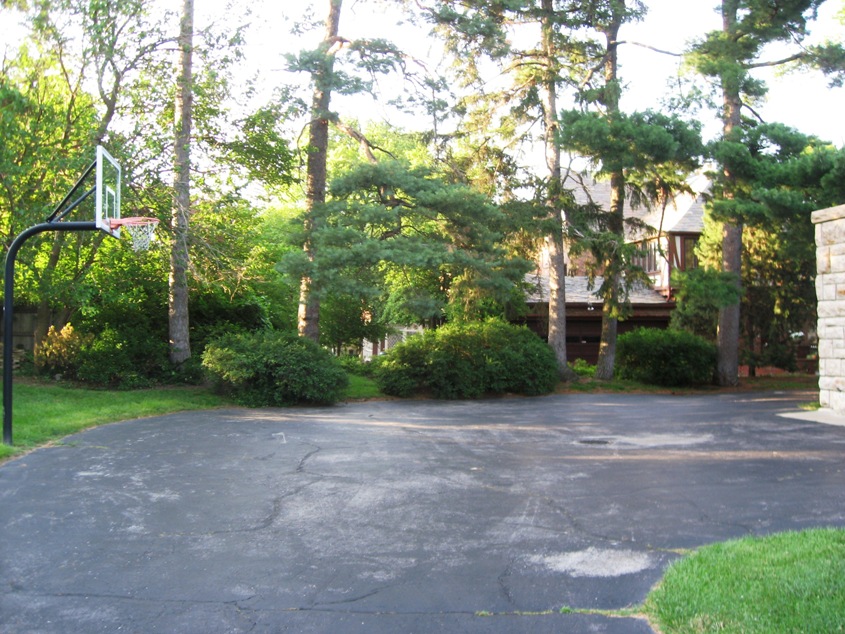 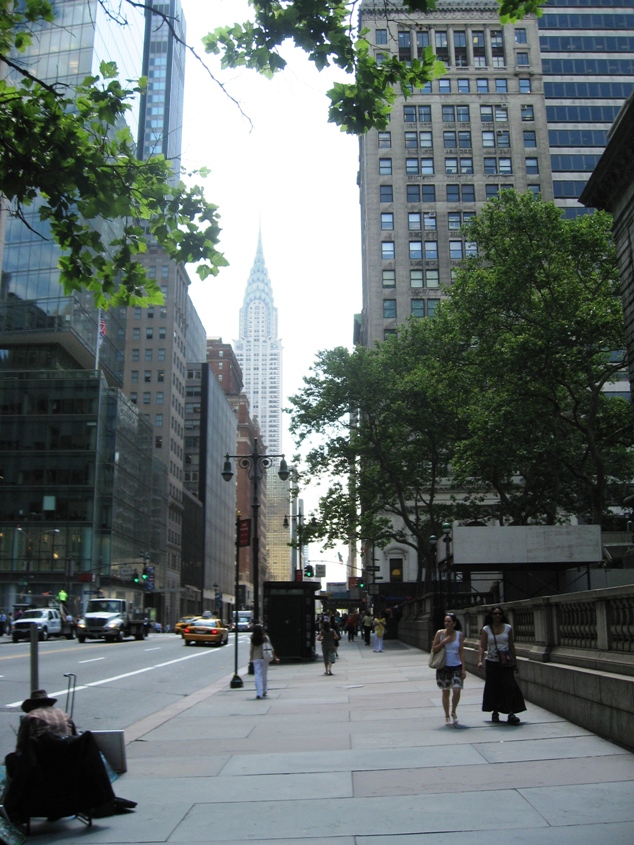 I was in New York this weekÂ for literary reasons.Â  Also for reasons of distraction, but the two are often related.Â  Had lunch with Stephen Bracco, very kind novelist who writes for ArtisSpectrum.Â  We ate in a Korean joint on 32nd. 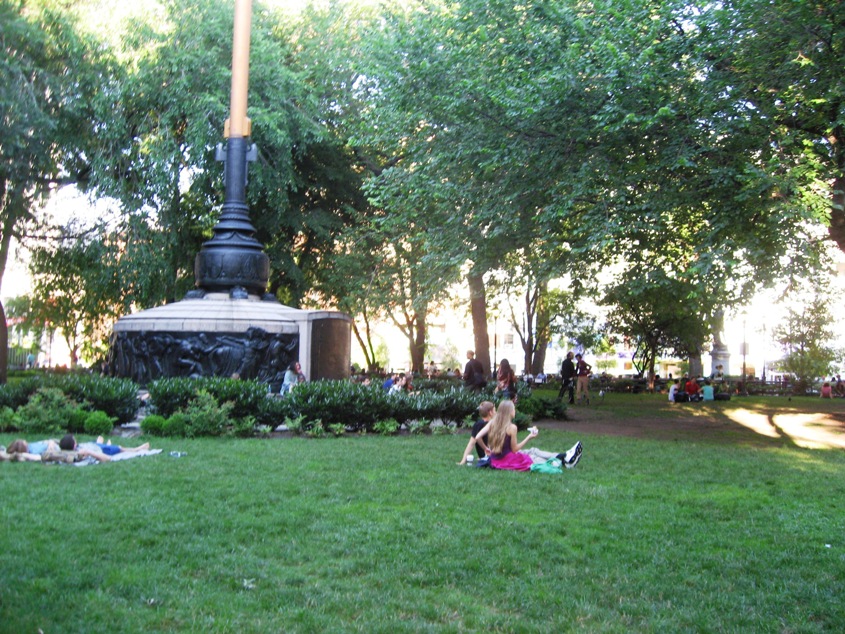 My appt was on Madison, so after lunchÂ I worked via laptopÂ in a coffee shopÂ offÂ Union Square, then went on to conduct biz.Â  Always love going to NY.Â  Don’t desire to live there. 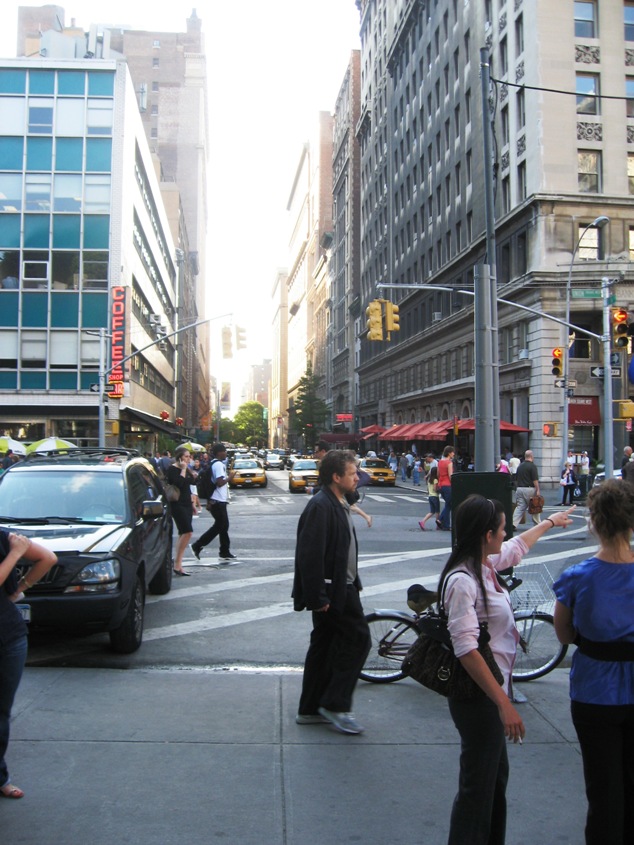 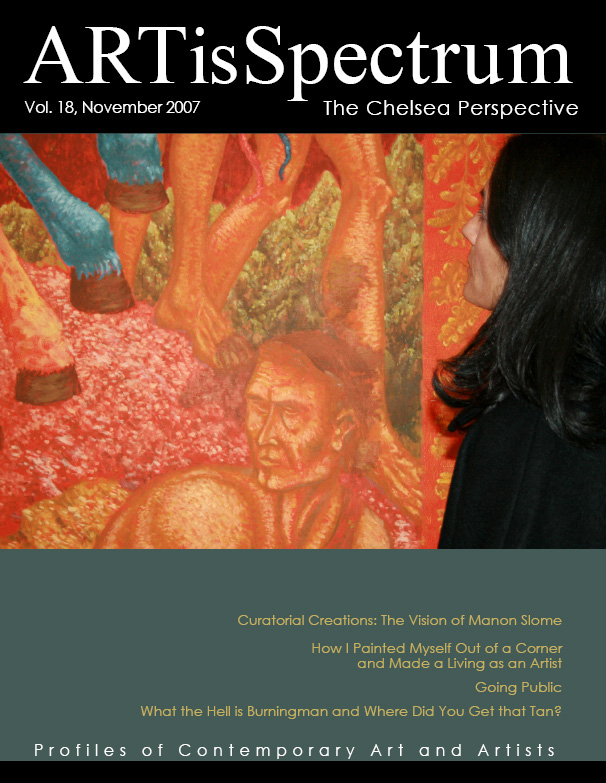 Living the Artist’s Life was reviewed, favorably, in ArtisSpectrum last month (of course I wouldn’t mention it if it wasn’t favorable).Â  This is a New York magazine centered in Chelsea, an area that fascinates me but that I also give a hard time for occasionally getting carried away with elitism.Â

There’sÂ a Regional Renaissance taking place all over America right now.Â  Savvy dealers in NY are aware of this, and work with it.Â  Elitists blinded by snobbery refuse to acknowledge it (you know, if it’s west of the Hudson…) andÂ as a result are not only missing out, but restricting cultural growth instead of feeding it.

My job?Â  To help ensure thatÂ artistsÂ west of the Hudson break outÂ anyway, whether in NY or elsewhere.Â  The article, if you’re curious,Â begins on pg 34.Â 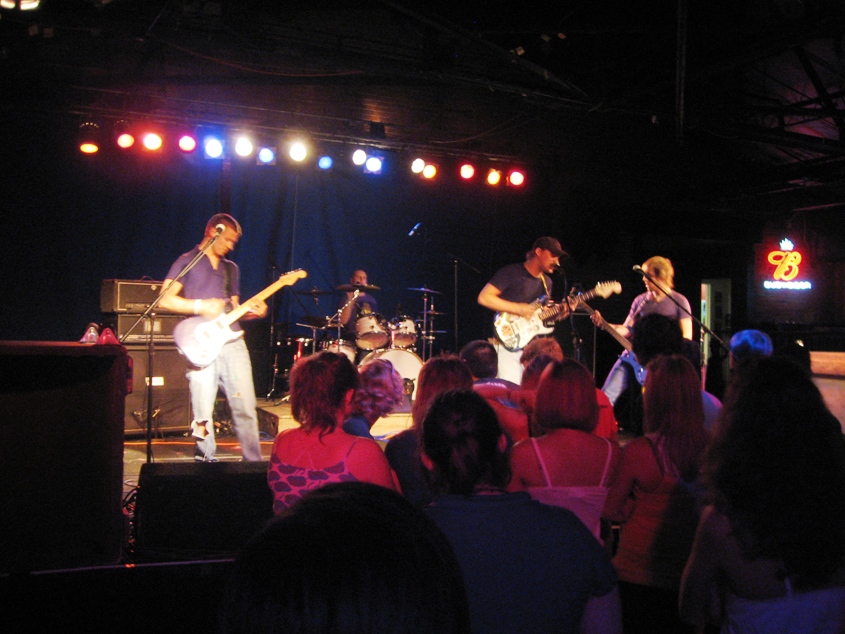 My oldest son, Denny, and his band Transition Element played a gig at The Beaumont Club recently.Â  This was a battle of the bands sort of thing.Â  Lots of young groupies andÂ all that.Â  Brown Eyes and I went to watch, along with my other son, Josh.Â  Loved it.Â  The boysÂ didn’t win but came close enough, and played well besides. 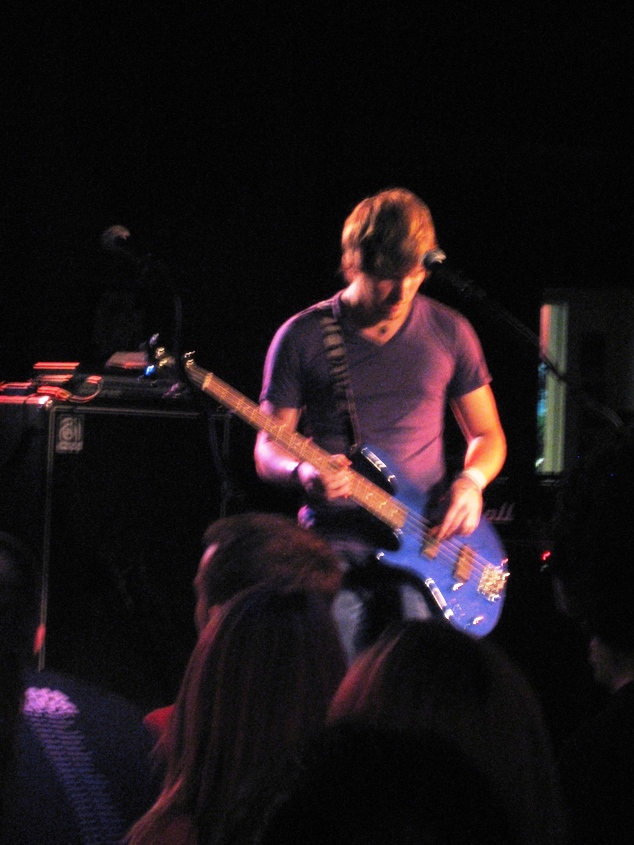 Groupies.Â Â When I’m on book tour, IÂ always tell my sons I have groupies (well actually I don’t, but they don’t know that).Â  They say, Yeah, but they’re all 55.Â  I say, Yeah, and one day you will be too.Â  Punks. 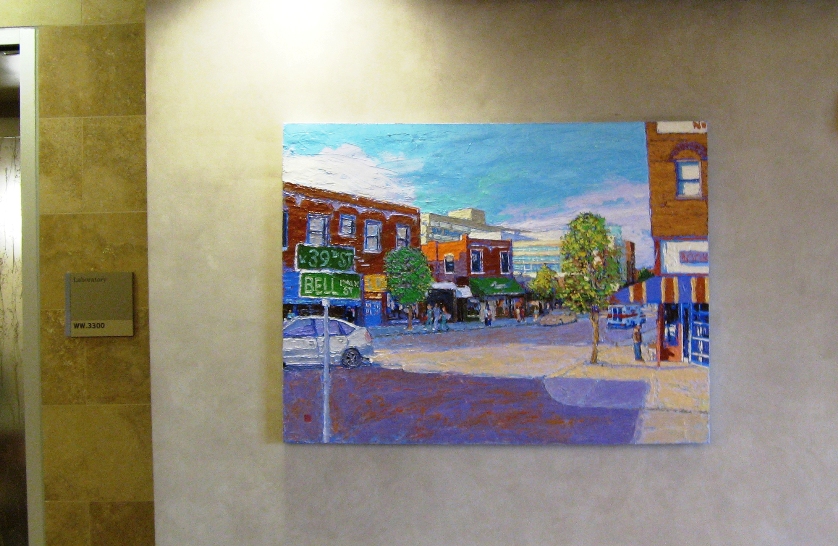 Allan started this commission last year, got interrupted by other work, got interrupted by a move, got interrupted by a trip to Malaysia, but the piece is now done.Â  A commissioned painting, it shows KU Medical Center in the background, while in the foreground three young doctors in scrubs are going to lunch on 39th, some dude (possibly a corrupt version of me), is browsing the books at Prospero’s, and an ambulance is headed west (not a literary allusion).

Palette knife work, it’s bright yet understated, like most of Allan’s paintings.Â  We hung it in the new Cancer Center. 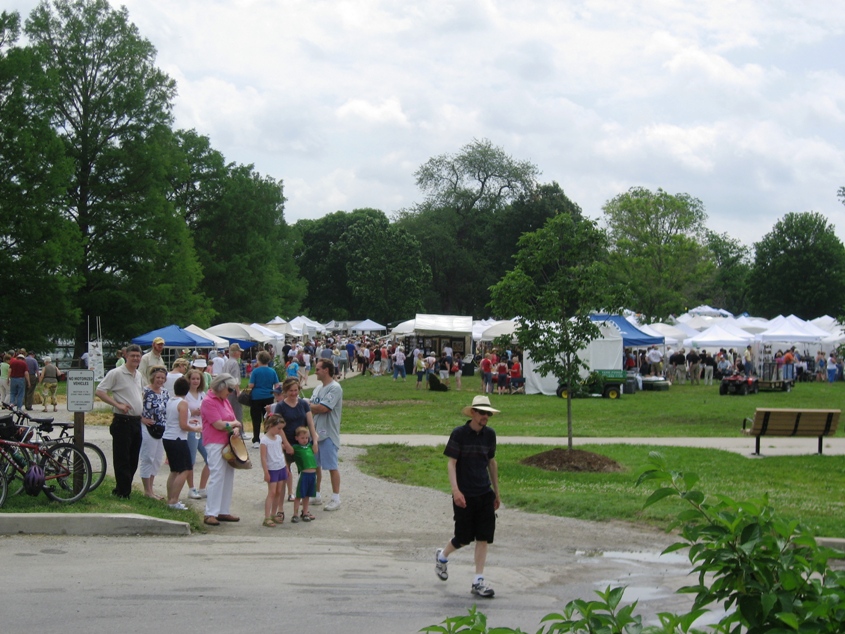 Was hired last week to serve as juror forÂ the Columbia Art League’s 75th Annual Art in theÂ Park.Â  125 booths, 125 artists, a wide range of media.Â  I’d love to tell you that there are shortcuts for the jurying process, but there ain’t.Â  How do I go about it?Â  Simple: examine the work of each artist three times, no matter how many, make notes, then make decisions.

The funniestÂ part of the day?Â  When the Art Cycles came parading in. 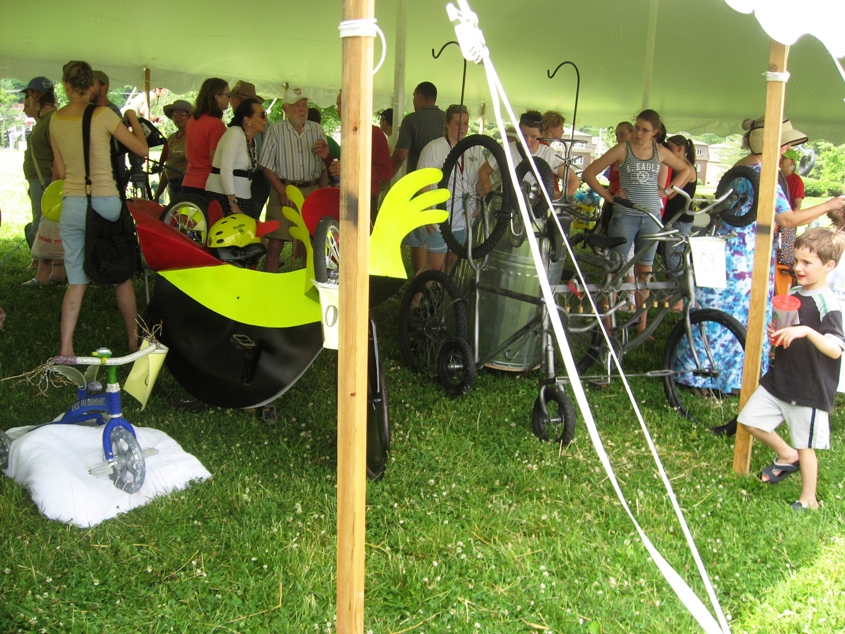 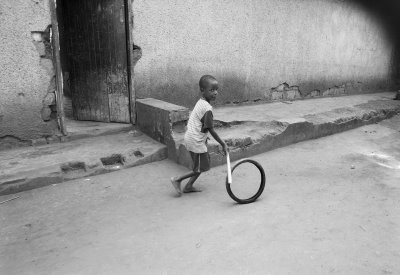 We’re hosting an openingÂ Friday night for photographer Gloria Baker Feinstein.Â  As with last year, this will in part be a fund-raiser for the St. Mary Kevin Orphanage in Uganda, where she travels each fall to document the lives of the kids there.Â  She does this in concert with the Change The Truth foundation.Â  Is the show depressing?Â  Quite the opposite: it’s uplifting yet honest, and never sentimental.Â  It also shows Gloria’s skill in capturing figure.

The Star’s Bob ButlerÂ did anÂ Article on the ShowÂ today, as well as on Lynne Melcher’s documentary about the orphanage.Â  The film will air tonight at Screenland, and we’ll show parts of it tomorrow as well.

The upshot?Â  We’ll help clothe, feed and educate another group of kids.Â  I dig it when art can achieve things like that.

Had dinner with Greg Michalson and his wife GinaÂ the other night.Â  Greg’s co-founder of Unbridled Books, which is rather legendary for their list of high-quality fiction.Â  They put out The Pirate’s Daughter, which is doing very well here and in the UK.Â  Two of their other titles were also chosen in the Top Ten at the recent LA Times Festival of Books, and they just sold the film rights to Hick.

Greg didn’t want to talk about my novels, but about my newest work of nonfiction, which I just finished.Â  Wanted to know if I’d send him a copy.Â  I said Sure.Â Â After all, itÂ isn’t every day that a legend asks such things.

Their logo?Â  He raises thoroughbreds on the side. 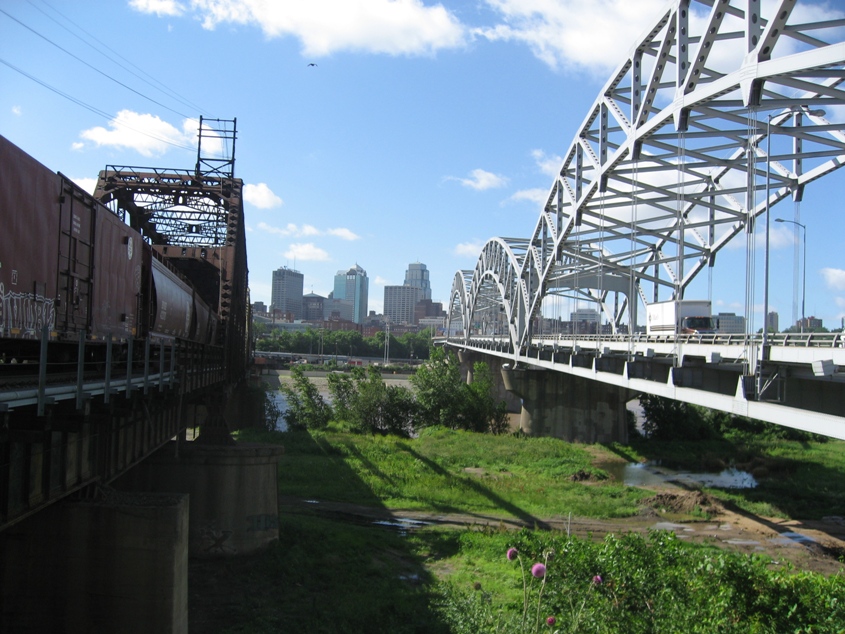 There are few things I love better than taking Friday morning off with my sons, eating breakfast downtown,Â then going for a walk along the river.Â  They all workÂ for meÂ in summer, and workÂ very hard, but everybody needs to goof off now and then. 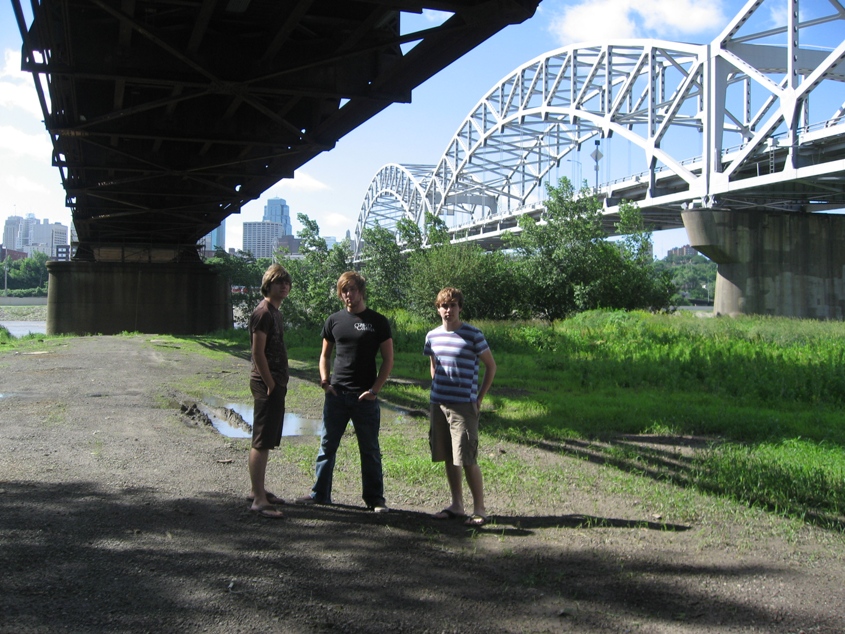 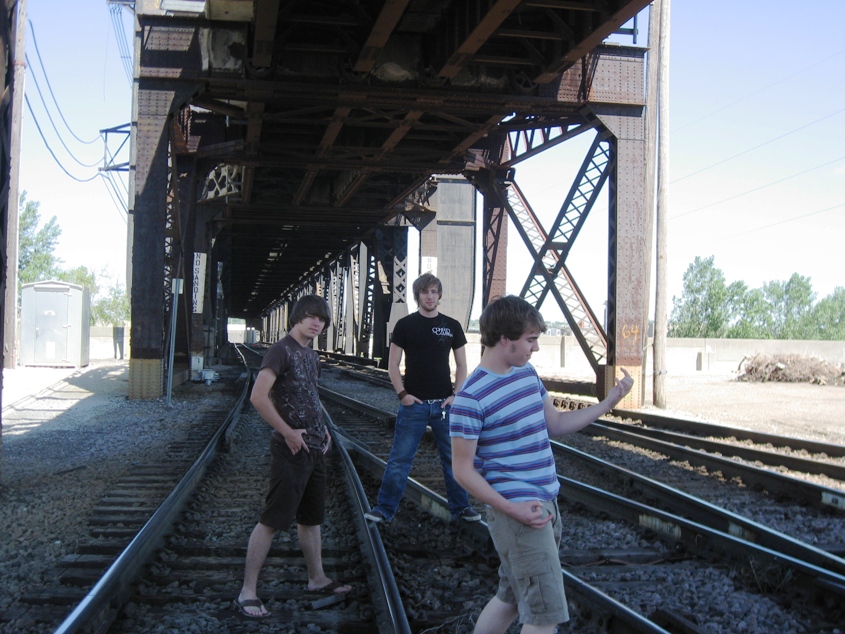 Apparently someone’s rehearsing for Battle of the Bands at the Beaumont tomorrow night.Â  What a punk.