It’s Labor Day weekend, hence the end of summer.Â  So in honor of all my working-class ancestors–miners, seamstresses, farmers,Â and a couple of bootleggers–I’m taking the weekend off.Â  In honor of yours too.Â  I’ll probably hoist my share of bourbons in the process,Â theoretically inÂ memory of the bootleggers, or anyway that’s my excuse.Â  I hope you’re able to take the weekend off as well.Â  It’sÂ a good time to celebrate the generationsÂ who sacrificed before we came along, includingÂ all those generations ofÂ struggling artists.Â

NextÂ Friday I’ll discuss the Boston Museum of Fine Arts, whyÂ they acquired aÂ piece byÂ one of my sculptors, and how we did this. 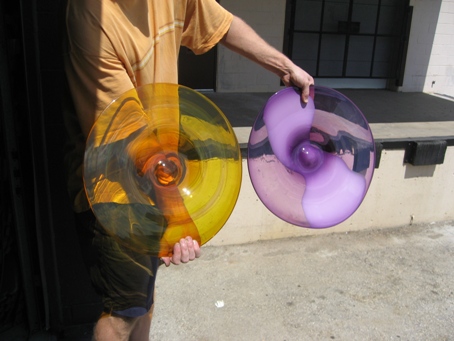 See these plates?Â  Tom and Julie Bloyd blew them inÂ their studio in The Crossroads–and these puppies ain’t easy to blow.Â  Why did I cut offÂ Tom’s head?Â  Because I suck as a photographer.Â Â Also I was focusing on the art, not his head.Â What are the pieces for?Â Â A very large sculptureÂ that’s a bit of a mystery, but I allude to it in Steel and Rednecks.

The rest will come out in the wash. 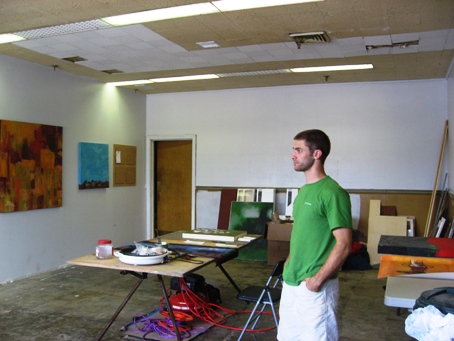 Dropped by Jeremy Collins’ newÂ studio the other day on my way downtown.Â  That’s he looking thoughtful, as if pondering the next 20 canvases.Â  He’s moved to a great old building that Hallmark used to own.Â  NowÂ Signature CanvasÂ has most of it, renting out a few studios here and there.Â  Big windows, great view of the city, north light.Â  What more could you ask for?Â  Free martinis. 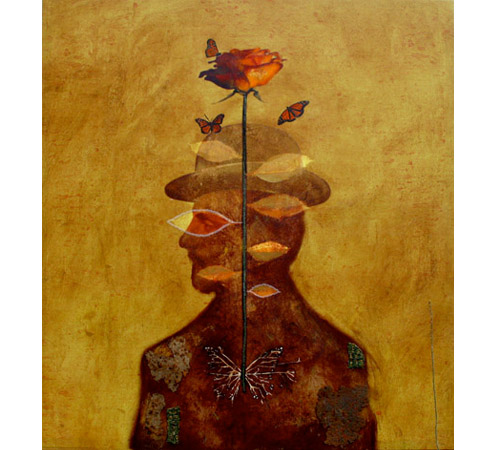 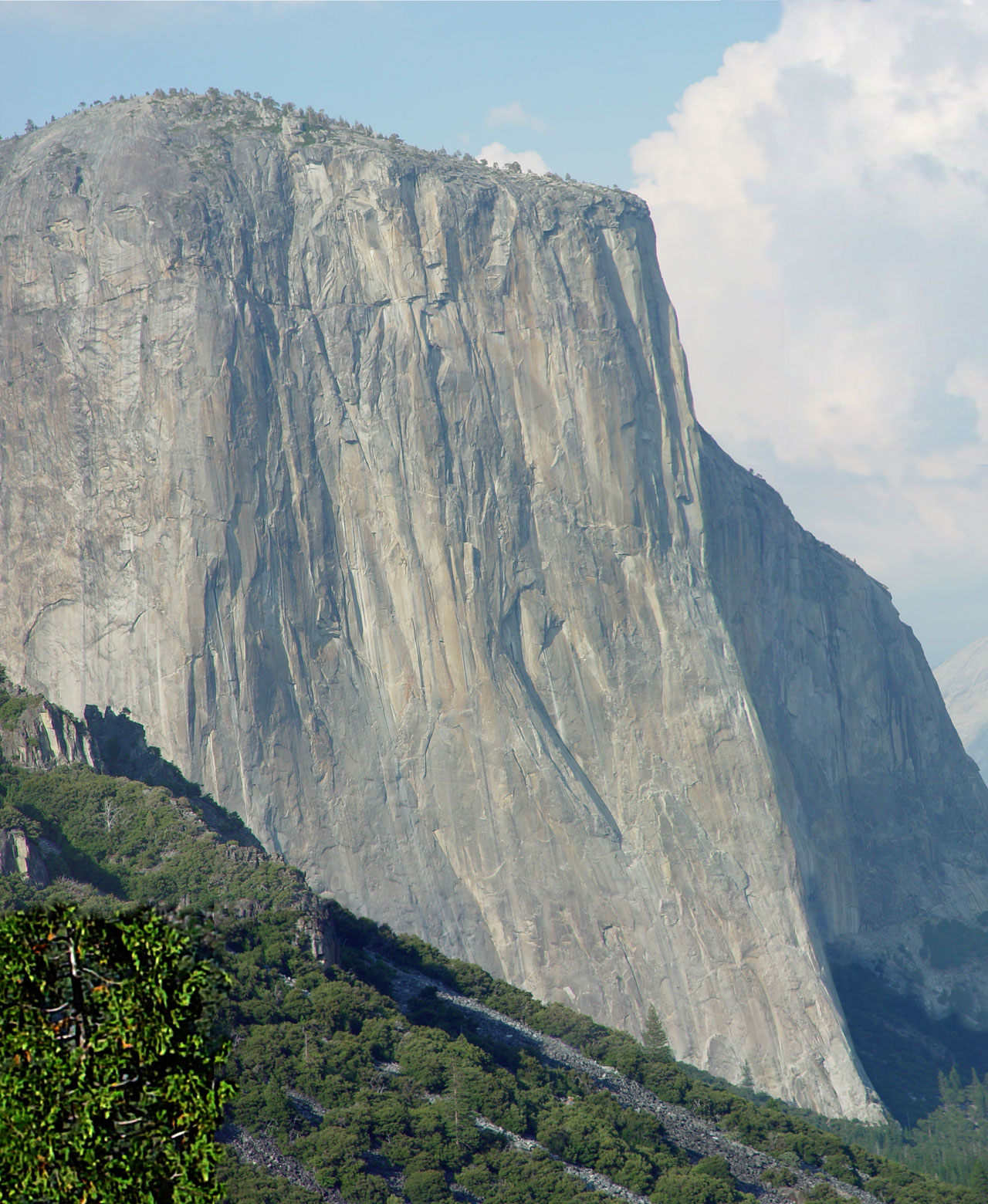 Not only is Jeremy a great painter, he’sÂ the best rock climber I know.Â  Certainly better than I, a rank amateur (damn his eyes).Â  He climbed El Capitan withÂ one of his buddies a few years back, I think in something likeÂ 27 hours.Â  Man, I could do it maybe in two days–up the back route.Â Â Â 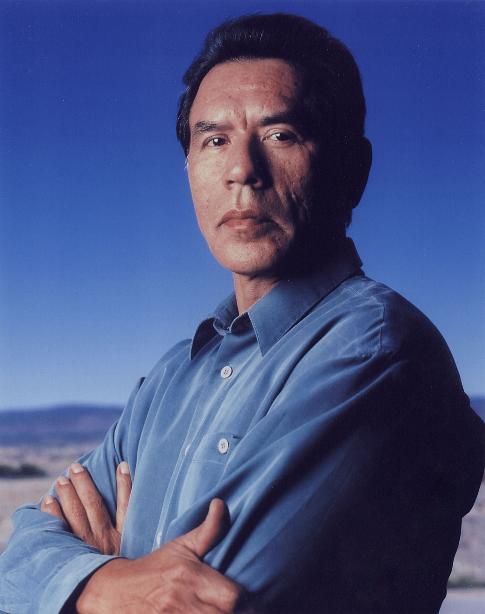 Contrary to a commonly held notion, weÂ as artistsÂ do not suffer more than other people.Â  There is so much unspeakable suffering in the worldâ€”from famine, war, and rampant diseaseâ€”that many of us in the industrialized nations donâ€™t even know the meaning of true suffering, including me.Â  Iâ€™m not saying that artists donâ€™t have it tough in their way, Iâ€™m just trying to put things in perspective.

However, even if we do not suffer more than others, we do tend to feel things more deeply.Â  This, combined with our inordinate sensitivities, seems to make the suffering more intense.Â  Couple that with the usual insecurities, spells of depression, and years of rejection, and baby youâ€™ve got one suffering artist.Â  Or to quote good old Scott Fitzgerald: â€œ…There are open wounds, shrunk sometimes to the size of a pinprick, but wounds still.Â  The marks of suffering are more comparable to the loss of a finger, or of the sight of an eye…â€

He wasnâ€™t lying either, since that dude suffered greatlyâ€”not necessarily because of what he went through, but because of how he took it.Â  His wife Zelda too for that matter, although some claim that by the time she died, in that horrible fire in the asylum in Ashville, that she didnâ€™t feel those kinds of things anymore.Â  Maybe she didnâ€™t, but Iâ€™d hate to be the one to speculate on the nature of her emotional state when the flames finally reached her.

Will you suffer?Â  As surely as you eat, drink and breathe.Â  Will your work benefit from it?Â  If you choose for it to.Â  Is this a necessary condition of being an artist?Â  I donâ€™t know about â€˜necessary,â€™ but I can say that itâ€™s a common condition of our existence.Â

All right, so we suffer.Â  But by God, we know how to live too.Â  And by we I donâ€™t mean just artists, but anyone who lives sensually, and through the power of their creativityâ€”whether in the art world or the corporate world.Â  Few people are given the gift to live in this way, few people are able to feel so fully alive between the spells of suffering.Â  That suffering is merely a part of the price you pay for your talent, and since you have to pay it anyway, I advise you pay willingly.Â  The alternative is to live an unenlightened existence.Â  I ask you, isnâ€™t that a common enough condition already?Â  And arenâ€™t you glad it isnâ€™t yours? 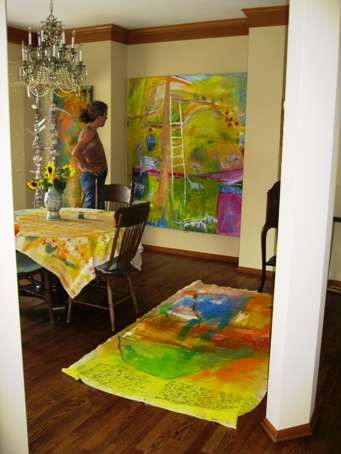 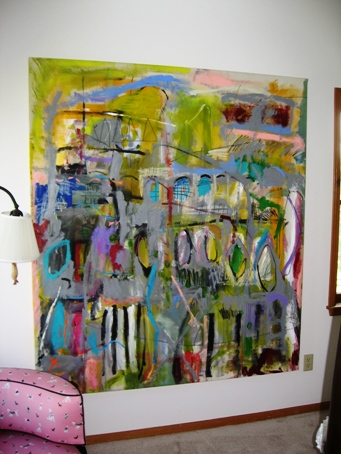 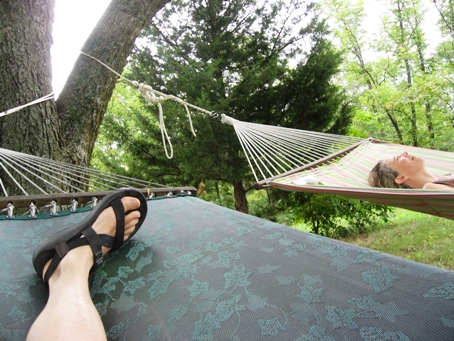 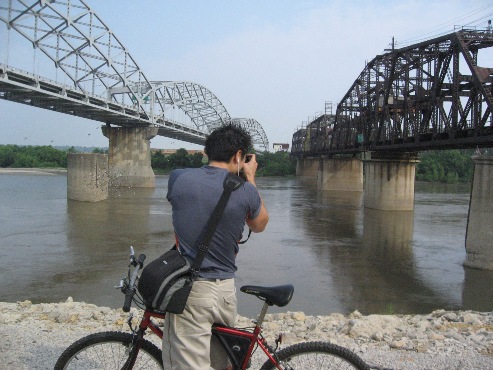 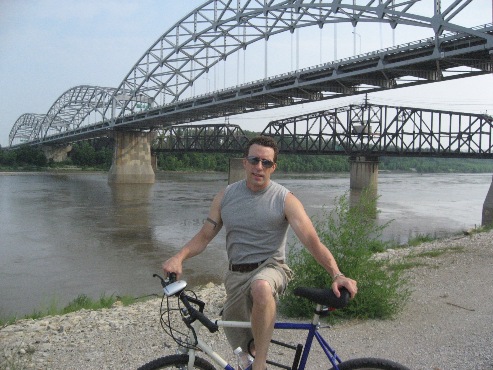 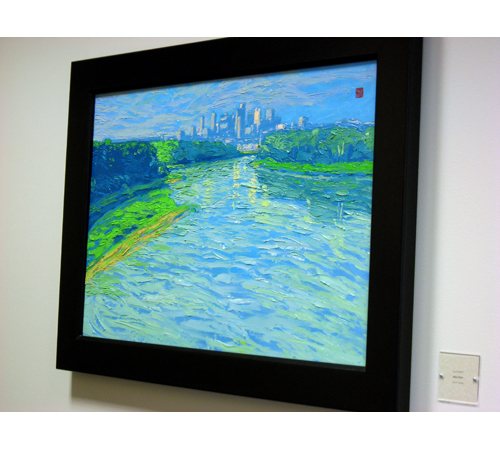 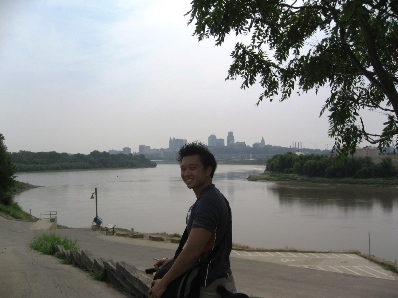 Last Saturday Allan Chow and I met up at the River Market, tossed back a couple of espressos, and unloaded the mountain bikes.Â  With cameras in tow, I wanted to show him angles of the skyline, the old bridges, and the rivers that he’d never seen before, and that you can only see by bike.Â  This is inÂ preparation for his October show.

So we started in the East Bottoms along the levee, then gradually headed into the West Bottoms, cruising along railroad tracks, through brush and junkyards and across abandoned bridges.Â  Also past the occasional and bewildered hobo.Â  Did about 12 miles all told.Â  Did we have to trespass to see all we wanted to?Â  Well, maybe. 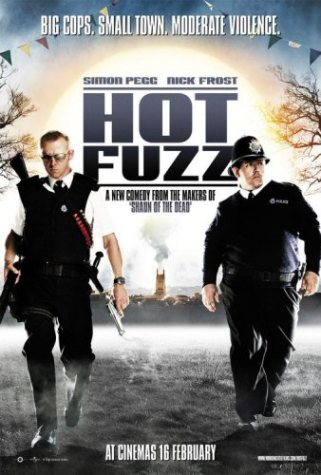 Watched Hot Fuzz withÂ beautiful Brown Eyes last night.Â  Damn, these Brits are too funny.Â Â The writing, filming, and subtle sound effects are perfection.Â  Much bigger budget than Shaun of the Dead, and they don’t waste it.Â  But don’t overlook what they have to say about the American fascination with gunplay at the end, and just how warped it is.

God I love the Brits.Â Â Looking forward to goingÂ back.Â  Nothing quite like having a Midwestern accent as one bicycles through the Cotswolds.Â  They’re always amused by it in the pubs. 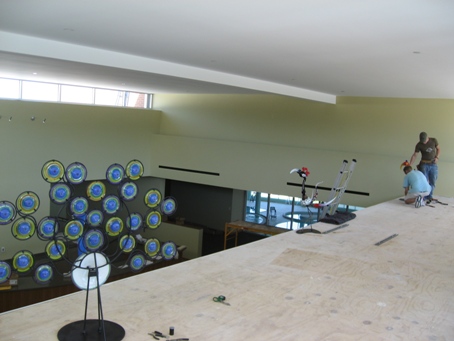 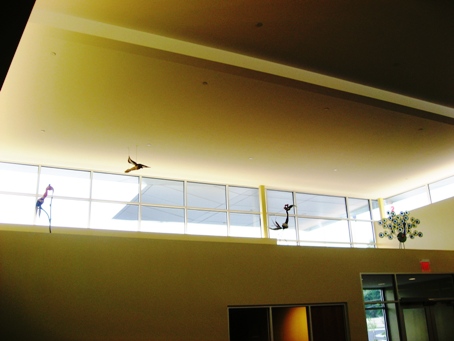 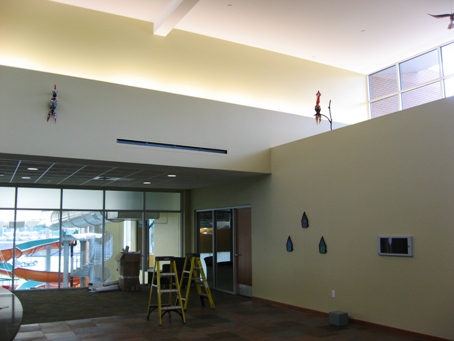 Last week we wrapped the installation of several blown-glass birds by Tom Bloyd.Â Â ThisÂ was atÂ OverlandÂ Park’s newÂ Matt Ross Community Center, whichÂ I alluded to in an Earlier Post.Â  Yeah, I know the photos suck.Â  But I’m an art consultant, not a shooter.

These birds are not typical of what we do, but this is the daycare area, and we wanted something that kids would go WOW over.Â  Hence: a hawk, meadowlarks, a woodpecker, touchable birdhouses, a peacock, etc.Â  I suspect it will be aÂ big hit, especially whenever the sun hits all these pieces.Â  Certainly illustrates Tom’s skill.Â  He’s spent 15 grueling years learning to blow with such control; I knowÂ that wasn’t an easy road.Â

I recently wrote a magazine column wherein I answer the following question about galleries insuring your work, and other issues. It reads as follows:

Q: All four galleries Iâ€™ve dealt with during my career have provided insurance. Is it commonplace for artists to carry insurance to cover their own paintings when they are being shown and sold in a gallery?

A: Well, it’s supposed to be commonplace for galleries to carry the insurance. But because the vast majority of galleries struggle in their early yearsâ€”and many in their later yearsâ€”they sometimes fail to take out insurance, or let the insurance lapse. How do I know? I had to do this when my gallery was young, back in ’96. I owed so much money everywhere, that I decided to let the insurance lapse while I caught up on rent, the phone bill, and marketing expenses. Sure enough, no sooner did the lapse occur than the gallery caught fire, and my business went on an entirely different trajectoryâ€”a good one in the end, but only because I refused to give up.

Upshot? If the gallery doesn’t carry insurance, which I consider to be a cost of doing business, then they shouldn’t carry your work. Nor should you insure it while it’s in their possession. That really ain’t your responsibility (although if they are uninsured, you certainly should be). Your first responsibility is to produce the best work you possibly can. Unfortunately, as with writing novels, that’s not always enough.

Q: I am currently talking to several art publishing companies regarding the possibility of converting some of my paintings into prints, and having their company market these to the public. My problem is that Iâ€™m ignorant of how all this works. So here are some basic questions:

Q1: Is an artist expected to sign an exclusive contract?

A1: Not each time. I advise that you try to avoid it, unless you sign such a lucrative deal that it’s worthwhile having an exclusive gig. Normally the first time out this isn’t done. Exclusivity, and lucrative contracts, tend to come with a successful track record.

Q2: What sort of royalty per item sold can I expect?

Q3: What should I look for in distribution? Are these art publishers regional, national or international (United States, Britain, Canada, Australia)?

A3: There are all types. In the beginning, it’s simplest to stay with one that covers the entire U.S. and Canada. Often overseas sales are covered by a different contract. But if you must start with a regional publisher, that’s better than nothing.

Q4: Are there any legal experts in the field I can contact before signing a contract?

A5: A lawyer who specializes in copyright law would be your best bet. I advise that you go through the contract with one before signing; he/she may even be able to help you negotiate a better deal than you can on your own. I also advise that you land a reproduction agent in negotiating these details for you, if you can. However, since reproduction agents can be as tough to land as the literary variety, you’ll likely have to start out on your lonesome. Representation can come after some initial success.