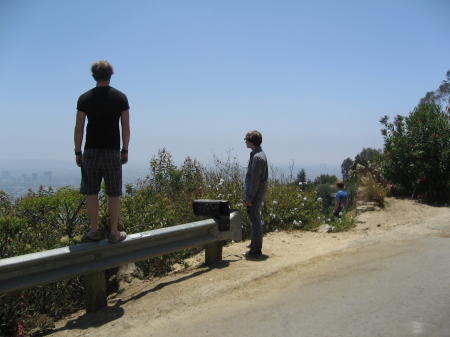 LA from the Hollywood Hills 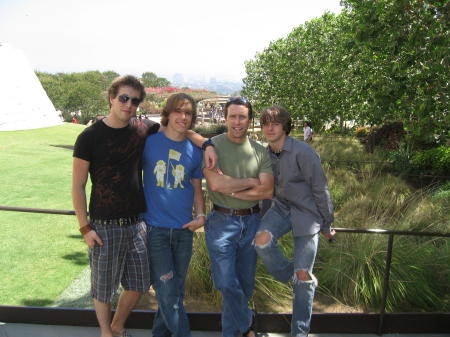 Our stay in LA was, like many things there, bothÂ beautiful and weird.Â  On Saturday night I took my sons for a walk along Hollywood Boulevard: break dancers, a faux Michael Jackson, Graumman’s Chinese Theater, and prostitutes.Â  They’d never seen anything like it, but then you don’t unless you come here.Â  I walked them around the city until they couldn’t walk anymore: the Boulevard, The Strip, and the odd quiet little streets of bungalowsÂ where so much desperate seeking for fame both lived and died.

The following day we dug on Laurel Canyon, Jim Morrison’s old shack, the General Store, and the Hollywood Hills.Â  A lot cinematic and rock-n-roll history in those hills, which yet has something sad about them.Â  The boys learned a lot just by walking them.

Later I checked out the galleries on Rodeo Drive and in Beverly Hills, again to place Arlie Regier’s work.Â  But I chose not to make the approach now.Â  It’s going to take more research, and time, to find the right one in LA.Â  I’m not going to hurry it.Â  Just like I did in Vegas, I’ll set up the approach carefully, then close the deal.Â  He deserves that.

WillÂ I find the right gallery for him here?Â  I believe so, probably by Sept.Â  It’s time.Â  Will blog about it when it happens.

Later we went to The Getty, andÂ after thatÂ swimming at Santa Monica.Â  A great day.Â

On to the Central Coast, thenÂ San Francisco.Â  My wife is waiting for us there.

3 thoughts on “City of Angels / The Galleries in Beverly Hills”