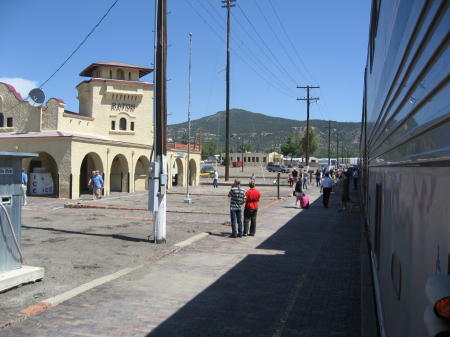 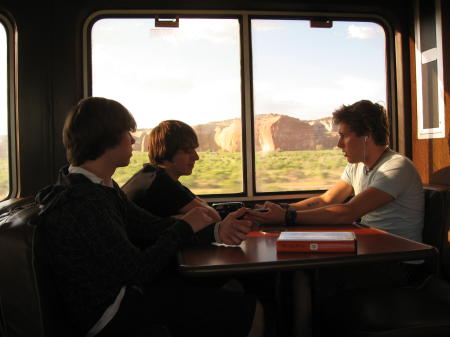 Though I’m due in San Francisco in 9 days, we started the trip going southwest.Â  First shot shows the train stoppedÂ at Raton, NM, just below the fabledÂ RatonÂ Pass.Â  Second shot shows the teenage punks in theÂ lounge car as we approach the Painted Desert in AZ.Â Â They’re talking, inevitiably,Â of romance.Â  Actually a romance already blossomed on this trip between the oldest one and a girl headed home.Â  I’ll say no more beyond that.

I’m nuts about traveling by train, especially taking the Santa Fe road out of Union Station, watching as low prairie is replaced by high prairie, then theÂ foothills, then the mountains, then the long expanse of the desert all the way to Flagstaff.Â  We’re in Flag now;Â art business in Las Vegas tomorrow.Â  Yeah, it’s a vulgar town dominated by a shallow art scene–which is what I call fertile territory for art of real caliber.

2 thoughts on “Journey to the Southwest / Art Business in Vegas”