A very kind woman I met a couple of years back, Sachi Tahara, dropped in today on a visit from Japan.  She always does this unannounced, but somehow at a time when I have a moment.  She graduated from the art institute here, and is now involved with a sort of Design Incubator in Tokyo.  I don’t quite get how it all works, there being something of a language barrier, but I know she does it well.

She brought me these insane chocolates that go very well with my 25 cups of espresso per day.  Hooked already.  Also showed me work by one of her friends, Aya Saki.  Very much worth a look.  You’ll find an impression of Sachi somewhere in there. 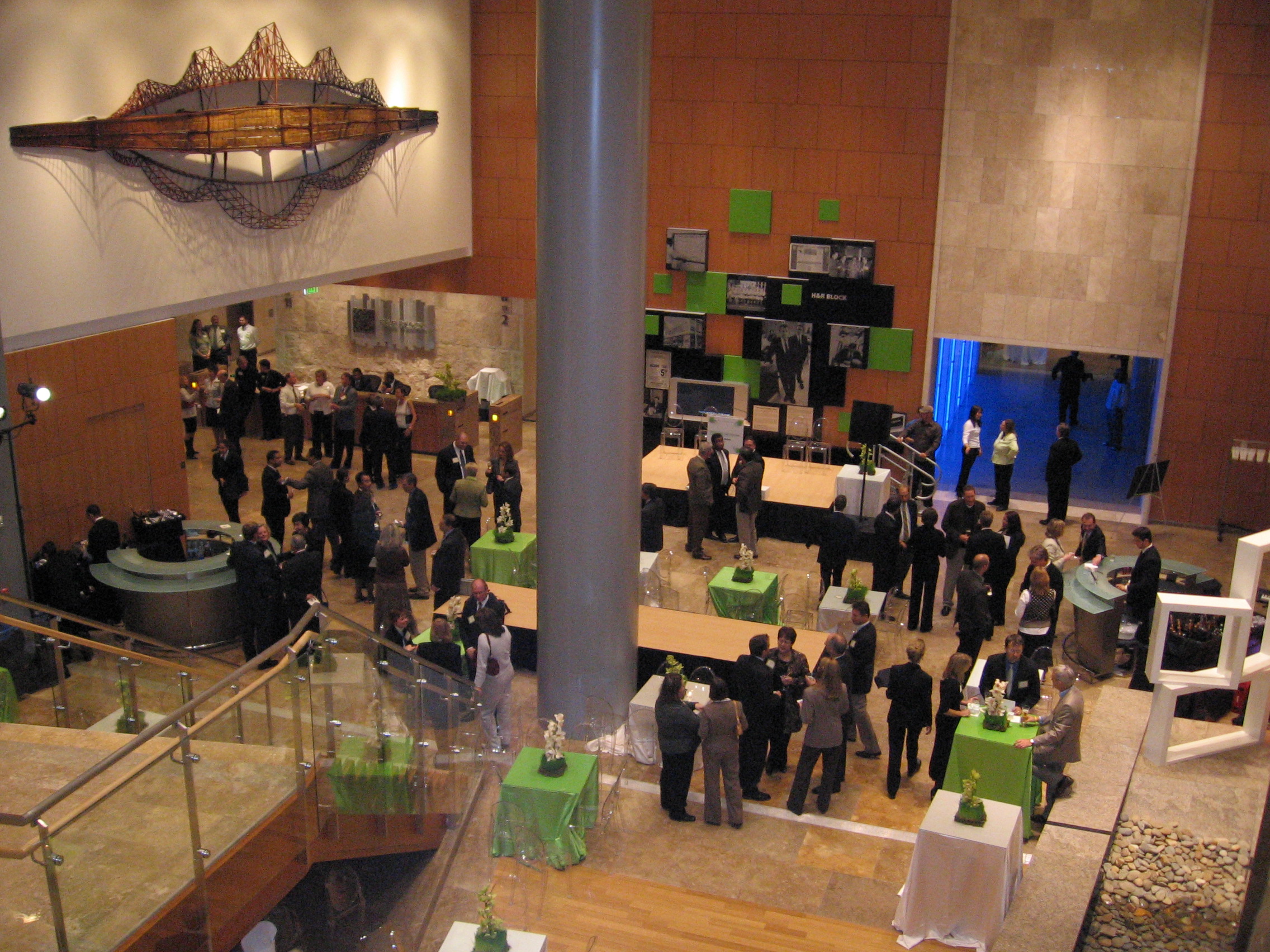 This gig was held last Tues. Business attire requested, which for me is a newer pair of jeans. Very nice. They took photos of my wife and me entering, then shipped them to us. Caviar, champagne, smoked salmon. I loaded up on the caviar. Speeches, a lot of hand-shaking, and a lot of people thanking me for structuring this program the way I did. That was good to hear, but it was only possible because of the great talent I worked with.

The new Block headquarters will have a lot to do with the rebirth of Kansas City’s downtown district.Being a native, I like that as much as I do their openness toward all types of art. Great client. Pretty sure they’ll back me in some projects for inner-city teenage artists. More on that later.

When I was a younger writer–in my 20s–I was convinced I had it so damn hard.ï¿½ I knew I had a long road ahead of me, and that I was likely years from publication (it turned out to be decades).ï¿½ I was also aware that the fiction market was diminishing, and that my calling was not the noble thingï¿½it once had been.ï¿½ The odds were greatly stacked against me, and hence my wife and kids, who needed me to succeed.

This led to some pretty deep bouts of self-pity, which led to some bitterness, which made me prettyï¿½lousy company.ï¿½ That ledï¿½to many lonely nights with the typewriter,ï¿½although thatï¿½fortunately led toï¿½several books.

But I believed I had it so rough.ï¿½ I mean I was white, male, and living in the wealthiest country in the world.ï¿½ Yeah, rough.

In truth, it was aï¿½difficult struggle, requiring every ounce of mental and physical energy I could summon just to break through, which I finally did as a writer after 25 years, though my success as an art consultant preceded that.ï¿½ Sure I did the dance with bankruptcy, creditors, bounced checks, maxed-out cards, etc.ï¿½ But now that I’ve worked with so many Inner-City Kids, and have seen what “rough”ï¿½is reallyï¿½like, I know how easy I had it.

My point?ï¿½ I did a little complaining in those days, though I tried to control it, since I did on occasionï¿½understand the importance of stoicism.ï¿½ But what I should have been doing was giving thanks all along: for my talent, the opportunities at hand, the privileges I enjoyed compared to most of the world’s people, and the challenges before me.ï¿½ I didn’t understand that lesson soï¿½well then.ï¿½ Now, at age 49, I’d like to believe I’ve finally learned it.ï¿½ I hope you learn it far sooner than I did.ï¿½ Probably you will.ï¿½

Absolute Arts posted another one of my Columns. In this I talk about how most art fairs are a frank waste of time for the serious artist–though some can be worthwhile. Don’t doubt this will inspire much response. Read on… 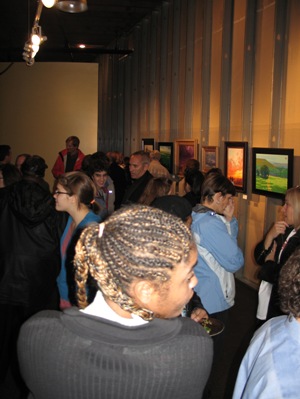 On Sunday the KC Star wrote a lengthyArticle, with several photos, about the Field Trip we took several kids on last month. As I discussed before, these are wonderfully gifted teenagers who happen to be from an inner-city high school, Paseo Academy. That makes them no less gifted, or visionary, than kids from anyplace else. The only difference is the opportunity that is afforded them. We–a committee I work with–are trying to help provide that.

Anyway the field trip was a hoot, and the opening just as cool. Virtually every kid sold something. The photo above shows the excitement, and the joy. Well, baby, that’s what it’s about. 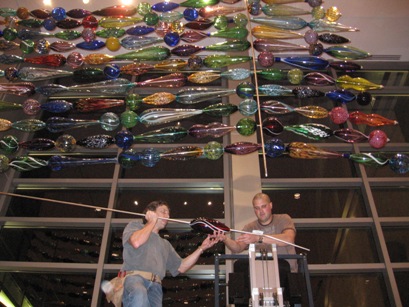 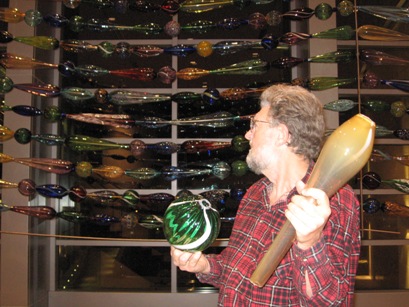 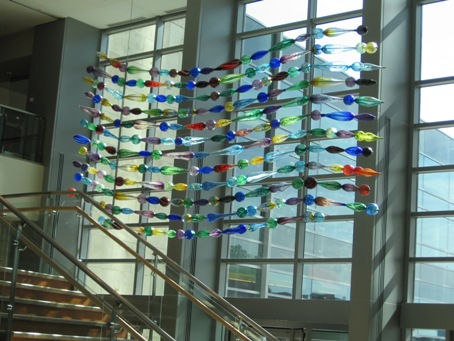 Top photo shows Mikel Burks and me installing final elements of Vernon Brejcha’s glass sculpture for the Block atrium. 240 pieces. Once again, I designed the armature and hanging method, Vernon blew the glass (with help from Stephen Protheroe). That’s he gazing at his work. Bottom shot is of course with the benefit of the morning sun.

Everyone seems to love the piece. I’m just glad the damn thing’s up. Bit of a job, hanging it. But you watch that sunlight pass through it, and all the headaches are forgotten. It’s meant to inspire employees; I’m told it does. Vernon calls it FenceLine. 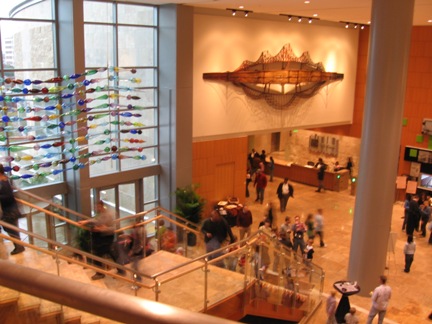 Grand Opening yesterday at Block. This is a rather poor shot of the Atrium, since I was shooting instead of one of my assistants.

Great party. 2000 people. Artists and Block Associates everywhere. I had to give umpteen tours of the collection, shake 1400 hands, and talk myself hoarse (though my wife claims that’s impossible).

The point is, everyone had a great time, and everyone was ecstatic about the art. No matter what a person’s taste, they all found something that juiced them. That pleases me, just as much as watching the artists and the associates mingle. Art isn’t exclusively for the privileged, the snobbed, the supposed elite. By god it’s for everyone. More interesting that way. Better impact on society as well. 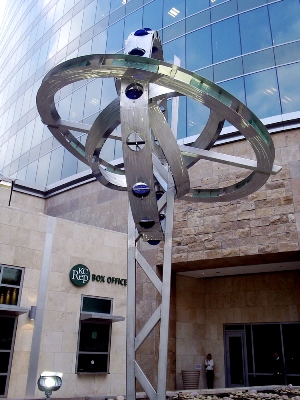 This piece, composed of stainless steel and slumped glass, is by none other thanSTRETCH. Calls it the Heartland Shuffle. I call it superb. It’s situated between Block and the KC Rep.

On June 9th I posted a blog about art fairs, and whether they’re ultimately a waste of time.ï¿½ This is a follow-up to that:

The College Art Association, which is represented on most campuses, can also provide you with lists of shows that occur nationwide.ï¿½ Many of these can be worth participating in, if only in the sense of adding to your resume, and your credibility.ï¿½ Investigate them, and decide which are appropriate for you.

In the same vein, most cities have an artists’ coalition or association.ï¿½ These too will have listings of various shows, especially those held in nonprofit or cooperative galleries.ï¿½ These shows can be quite worthwhile in terms of meeting folks who can be of help to your career, such as established artists or gallery owners.ï¿½ Like anything else, these can also be a waste of time, depending on the show, its attendance, and how well you handle any opportunities that may arise.

You can also call any of the major galleries in cities where you want to exhibit, and ask them about reputable shows in their area.ï¿½ A gallery director, or assistant director, will often be better informed than anyone else about the viability of certain shows.ï¿½ In other words, they’ll be straight with you about whether a particular fair is well-run, or a joke.ï¿½ You’ll never get that kind of information from the organizers.

The more shows you attend, the more shows you’ll become aware of; other artists will help inform you of them, as will show organizers and attendees.ï¿½ Who knows?ï¿½ You might even sell some work along the way.ï¿½ We rarely did, back in the early ’90s when I still had to pay those dues, but there were certain artists at each show who somehow sold like mad, while the rest of us did not.ï¿½ Weï¿½didn’t understand it, and often those very artists didn’t understand it, but still it happened again and again.ï¿½ Maybe you can become one of those artists before launching your gallery career.ï¿½ I’d like to think so. 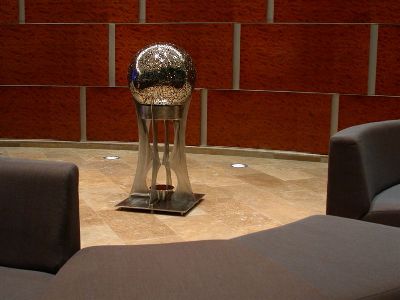 Dave Regier’s Floating Sphere has now been installed in the West Lobby of Block. It’s the only work I’ll put in that room, since sometimes understatement is far more intriguing than the adverse. It’s up against a wall of babinga.

This sculpture is composed of roughly 5000 pieces of stainless steel, each an inch long, each welded in place one-by-one. Back-breaking work. Yeah Dave’s a little crazy, but then most sculptors are. The result is breathtaking just the same.