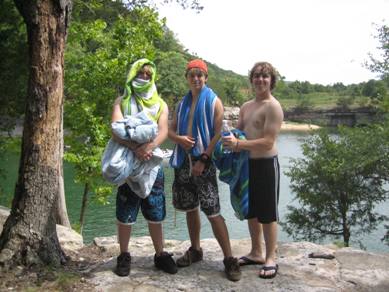 Went canoeing over the weekend with my kids and some friends. White River, northwest Arkansas. Worked on the final draft of the screenplay when we weren’t canoeing, sipped bourbon evenings after writing. Got in a little cliff-diving along the way (the boys are posed on one of the cliffs), and several opportunities to observe some locals in full Hillbilly Excess, booze, dope and all.

My Dad’s people are from the Ozarks, where I spent much of my boyhood. I dig the people of the hills, at least those that have dignity, wisdom and respect for others. But the other type–the hard-drinking crackers that are steeped in ignorance and violence–I ain’t got much use for. These got way out of line, which a simple confrontation resolved.  It doesn’t require violence, just absolute firmness–like a parent correcting a child, except with profanity. Such a waste of energy dealing at that level, but it’s the only thing those people understand.  Entertaining either way.

Spent our final night in Eureka Springs, a very good town to write in.  Some great artists there as well.  Visited two of them.