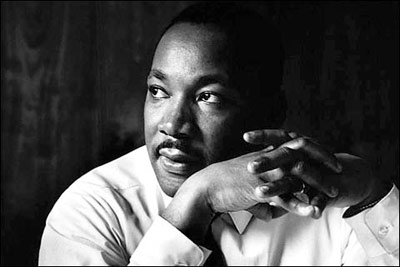 As time passes, it’s easy to forget all the people, of all races, who opposed King and his policies of nonviolentÂ protest.Â  Had I not read a bio on him a few years back, I wouldn’t have known about these things either:

–That he was stabbed in the chestÂ at a book-signing in Harlem in 1958,Â and hospitalized in serious condition.Â

–That many black college students vociferouslyÂ opposed his pacificist approach,Â feeling it would never work (not that anyone could blame them).Â Â

–Toward the end of his life he wasÂ mocked byÂ some Civil RightsÂ militants who thought his approach outdated.Â

In his final years, I doubt if a single day passed without his sufferingÂ deep anxiety, depression, and self-doubt.Â  Like most visionaries, he was far more celebrated in death than life.Â  But that is often the lot of those who try to moveÂ the world in the direction ofÂ positive change, and are one step ahead of it.

Either way, this is a great day to honor him.Â Â But as we do–or at least as most of us do–one can only guess at how hard and lonely his road really was.