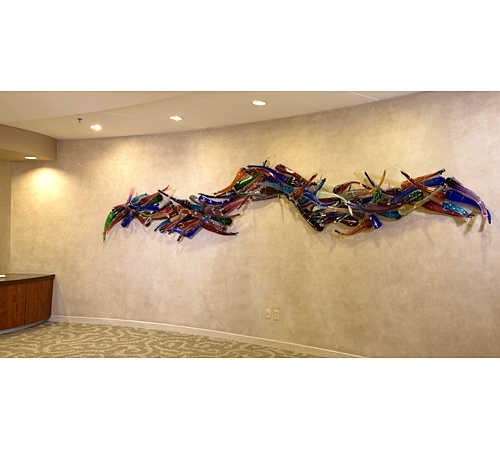 This is a wall installation in blown glass thatÂ we did for the University of Kansas Hospital’s new Cancer Center.Â  Leopold designed and installed;Â Vernon Brejcha was the glass artist.Â  WeÂ first installed this in the old cancer center in 2004.Â  It was moved to the newÂ one this year.Â  Very difficult to move, but the end result’s pretty good. 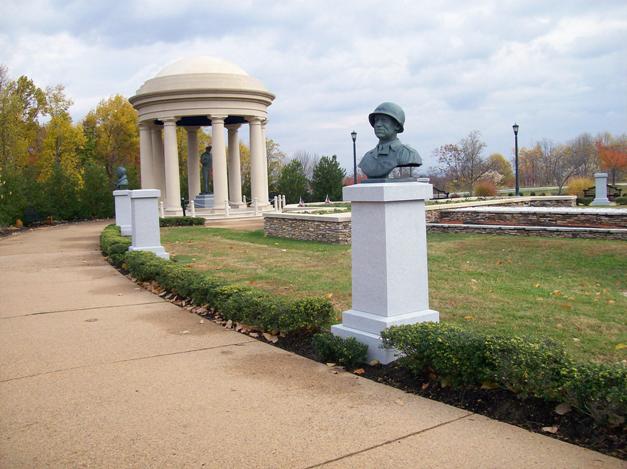 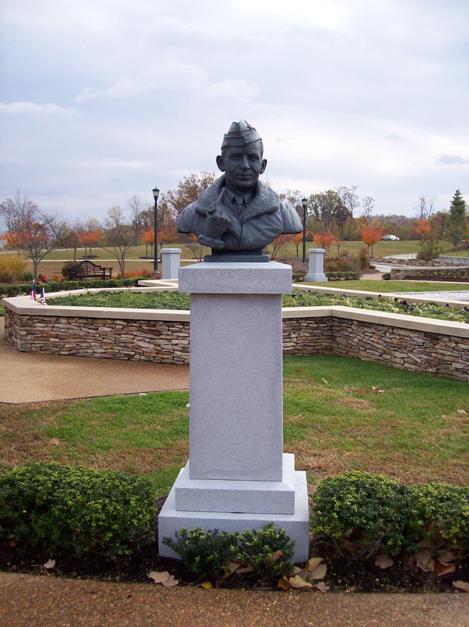 The bustsÂ as they’re completedÂ are beingÂ arrayed inÂ this memorial garden, around a monument of Eisenhower, also by Jim.Â  The first casting of the Eisenhower is in the Capitol Building in DC.Â  Is all this a great honor?Â  Enormously.Â  Only Eisenhower could have brought all these diverse personalities together, both British and American, then elicitedÂ great performancesÂ from each, often taking back seat to their raging egos.Â  That is no mean trick.Â  Remember, he was also the one who warned us against the dangers of theÂ Military Industrial Complex, and how it would lead to corporate wars.Â  Hmm.

If you’ll look at these busts, and the other pieces on Jim’s page, you’ll see the figurative power thatÂ this man commands.Â  When I opened my gallery in 1991, no one would take him or me seriously because we were from Kansas.Â  Seems rather amusing now.

Is this work strikingly different from the contemporary work we do?Â  You bet.Â  Is just as valid?Â  You bet.Â 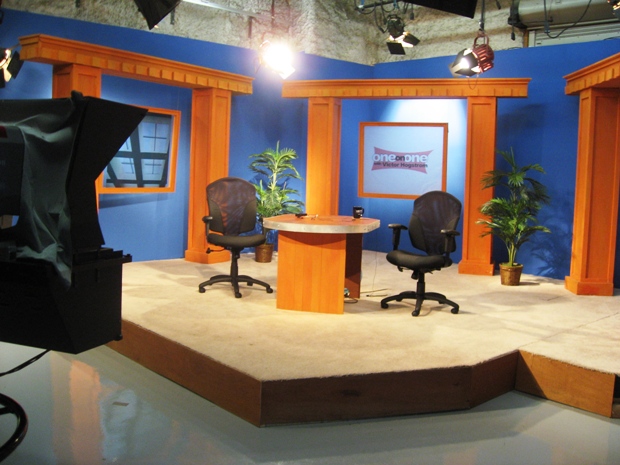 Interview this evening on the Program One On One, 9:00, Channel 19.Â  This is Victor Hogstrom’s show.Â  He’sÂ the CEO of KC Public Television,Â andÂ periodicallyÂ interviews different people in the arts, business, education, etc.Â  Great guy withÂ surprising questions.Â  You can tell me later if I blew it.Â  How he manages to fund public television, which I consider a cultural hub inÂ any region, is something beyond me, but I’m grateful that he consistently pulls it off.Â Â KCPT hasÂ fantastic patrons, both corporate and private; indicative of where we’re going in the arts. 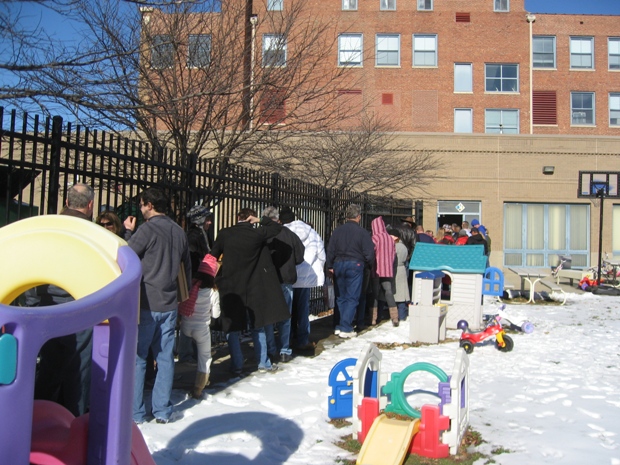 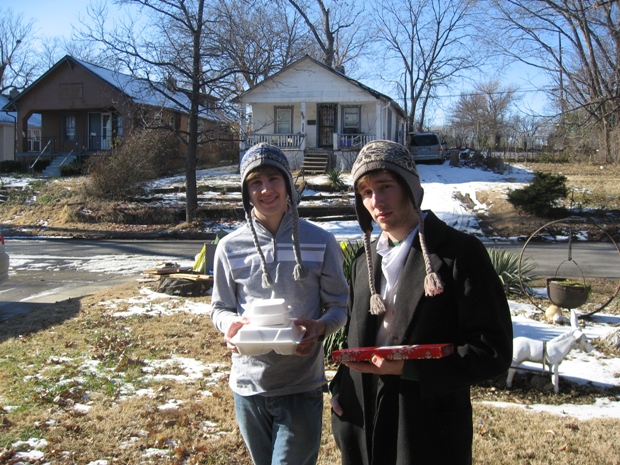 Yesterday my boys and I distributed meals and gifts for elderly folks on the East Side, in a program sponsored by the Salvation Army (note line of others preparing to doÂ same).Â  The recipientsÂ are people immersed in poverty: none of them have cars, many are disabled, the neighborhoods often wicked.Â  But each year it’s a big deal to them when we show up,Â bringingÂ things that make theirÂ lives a littleÂ easier–food, then practical gifts that we provide.

I’ve made a practice of this since the boys were 7 and 9, so that eachÂ ChristmasÂ after they opened their gifts, we always headed downtown.Â  It helps them keep things in perspective, and keeps material excess at a sane distance.Â  But god, where did they get those ugly freakinÂ hats? 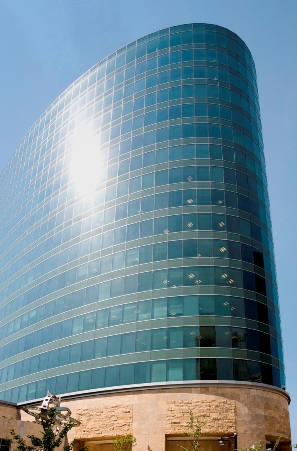 Many of you asked lastÂ summer when wouldÂ theÂ  documentary,Â Art on the Block, be online?Â Â WellÂ it’sÂ recently been loadedÂ onto You Tube,Â and can be viewed on Our Site.

This is a highly praised short film (19 min) that documents howÂ I took a group of regional artists, andÂ brought togetherÂ a world-class collection at H&R Block.Â  I insisted that Block not spend the money at galleries in NY or LA.Â  Love those towns though I do, my job is to help build culture in the provinces.Â  If I lived in Hartford, Dallas, or Sacramento, I would have done the same thing.Â

My point?Â  Phenomenal talent exists in all regions; you just have to give it a chance.Â  The documentary only covers pieces byÂ 10 artists who did site-specific work.Â  However we acquired works by 65 artists for the structure.

There are also a couple of interviews from my book tour, but those areÂ a waste of time. 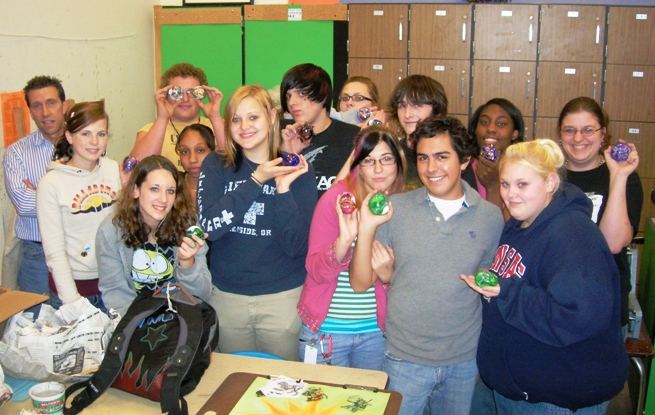 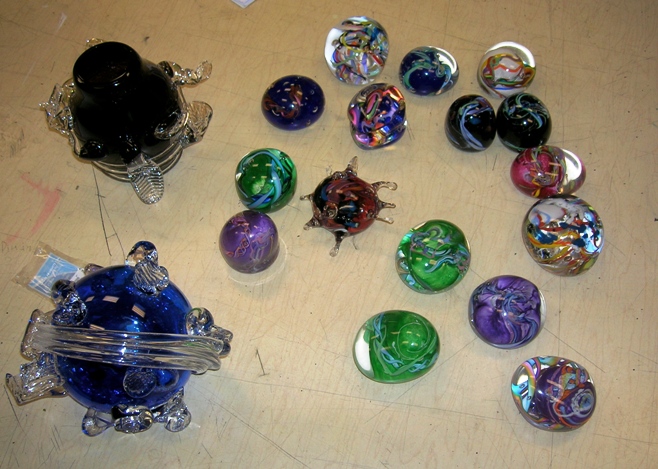 These are theÂ Sumner AcademyÂ Artists who Tom Bloyd taught to blow art glass, in a program I arranged and that University of Kansas Hospital financed.Â Â TheseÂ dudes and chicksÂ areÂ a bunch of punks, but as you can see, they’re pretty happy with their glass.Â  Well, so is the art consultant.Â  In fact I think you could say he’s very proud.

Tom of course is one of the glass artists who worked on the Sprint Center Project. 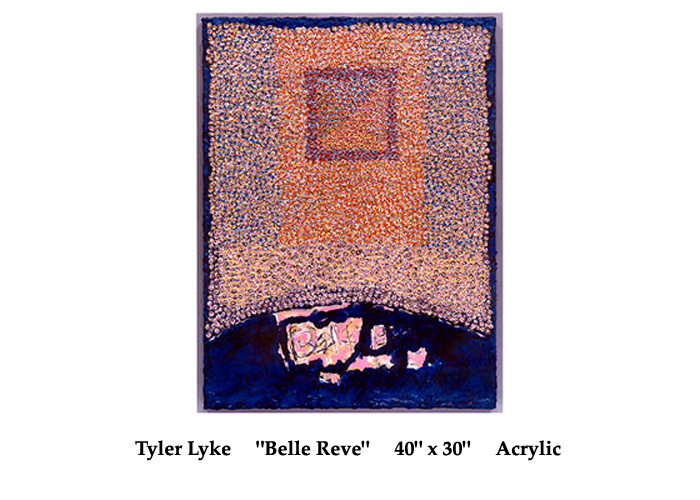 Installed this in the OP Convention Center a few years back: acrylic over heavy gesso, with an insane amount of in-painting.Â  Met Tyler in the 80s, and stayed in touch as his career went from undergrad work at KU, to grad work at the Penn Academy, to independent artist in Philly.Â  He’s gay, though that doesn’t come out in his work directly.

He’s also kind, endlessly passionate, has endured his family woes stoically (since most gays endure family woes), and never ceases to approach the empty canvas with renewed vigor.Â  Lord I admire his guts. 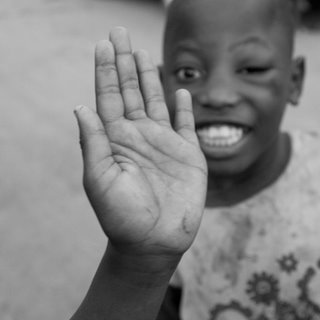 Yeah I know, this ain’t Friday.Â  But I wanted to remind you gentle readers that I’ll be returning to duty on 1/4.Â  In the meantime, I was so moved by Gloria Baker Feinstein’s Photographic Journey to Uganda, that I wanted to pass on how she documented it in her blog.

The orphanage where she stayed–St. Mary Kevin–is one where most of the kids have AIDS.Â  I know I don’t need to elaborate on the challenges they face, in a place where life is harsh enough without the onslaught of this disease.

Gloria took with her several artists to work with the kids, so we can bring the kids’ paintings back, hold an opening at the gallery in conjunction with Gloria’s work, and hopefully raise significant $ for the orphanage.Â  We raised some decent jack last year; hope to do much better this.

I bring this up in the current season, because so many people around us are obsessing over the material, sometimes forgetting the more enduring issues of life.Â  This is hardly a novel observation, nor one that any of you haven’t made.Â  But as I sell art to my clients, and buy gifts for loved ones, I think often of those kids in Uganda–and places similar– then remind myself just how bloody fortunate I am, even with the challenges of an artist. 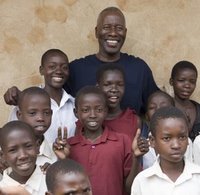 This is the last day for photographer Gloria Baker Feinstein, and friends, at the St. Mary Kevin Orphanage in Uganda.Â  I urge you all to go to her Blog and view the exceptional shots she took of the kids, and participating artists.

Above, Kansas City painter Lonnie Powell and some of his rascals. 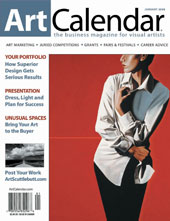 Art Calendar very kindly asked me to write a few articles for them, the first of which came out in the December issue.Â  It concerns what I look for in new artists, the standards by which I run the gallery, and whatÂ kind of bourbon I prefer (the brown kind).

It’s on the newstands now, if you’re curious.Â  I’d post the article here, but that wouldn’t be fair to the editors.Â  So I’ll post it in Jan.