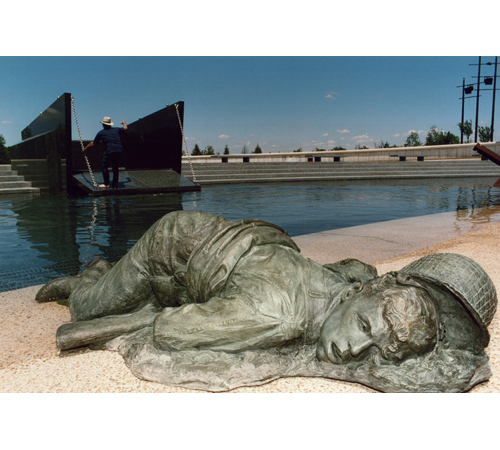 It was 10 years ago that those great people at the National D-Day Memorial informed me I had been hired as their art consultant, thus allowing me to avert bankruptcy.Â  I can’t describe what an honor this was,Â working withÂ veterans like Bob Slaughter and Charles Schulz, listening to all the stories as we did the research, then watching as Jim Brothers brought to life the set of monuments that have made this site legendary.

Are the works traditional?Â  You bet.Â  Do I regret this?Â  NotÂ at all.Â  Traditional figuresÂ are what the veterans wanted, and that is what we bloody wellÂ gave them.Â  Unlike other sorts of monumental sculpture in public installations, veterans tend to prefer traditional work.Â  This, for them, best relates to their sacrifices and lifelong hardships–the aftermath of battle’s horror.Â  I would never question that, nor make the presumption of knowing better than they.Â  It was merely Jim’s job, and mine, to make sure the work wasn’t shallow or predictable.Â

I have plenty of other projects where edgy, provocative, and perplexing sculpture is called for, and in fact is what works best.Â  But on projects like this, no way.Â  Just watching those vets smile, and weep, at the time of dedication, told me we had made the right choices.

2 thoughts on “June 6th, and the National D-Day Memorial”