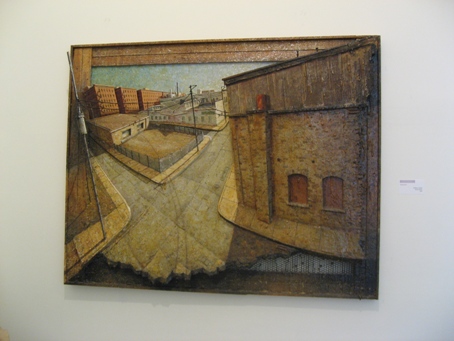 I discuss Jim Brothersâ€™ monument of Mark Twain, and how we placed it in Hartford, CT, in the book. Itâ€™s a pretty good story. In a nutshell, some scheming Missouri businessman tried to â€œcommissionâ€ the piece, meaning the guy wanted it for nearly nothin. The deal fell through. I began representing Jim at that time, presented the piece to the City of Hartford, and in 1994 they bought itâ€“although for far less than what Jim gets now.

Why did I take the lesser price? You know why: I desperately needed to place one of Jimâ€™s monuments in a national venue, even if we had to do it for less than we wanted. Using this as a springboard, I was able to exponentially increase his prices over time, until eventually he could command the fees he wanted. If we hadnâ€™t placed that first piece in so prominent a location, this would have been much more difficult to achieve.Â  At the same time, if we hadn’t promoted him so extensively, his prices never would have risen, and we’d still be giving his skill away.Â

When youâ€™re starting out, you will likely deal with much the same thing. The point is, later on you must be bold enough to ask what youâ€™re worth, once you establish what that is. Youâ€™ve paid your dues already; no need to go on paying them.

By the way, why did we placeÂ the monumentÂ in Hartford? Twain built and lived in a mansion there for 25 years. That structure is now the Mark Twain House & Museum. Sure Twain was from Missouri, and most people associate him with this state, but the truth is he got the heck out of Hannibal the first chance he could.

The noteworthy thing about this monument? Itâ€™s all in the face. Twainâ€™s life, like that of most artists, was an emotional roller coaster. His mood swings were enormous, and his last years were plagued with depression, despair and bitterness. His middle years were the happiest of his life, but after his bankruptcy, the loss of two children to disease, and eventual estrangement from one of his daughters, he was never able to regain his former vigor. This shows in the face, which Jim sculpted flawlessly, and faithfully, showing the realÂ artist rather than the myth. And when it comes to history, I am not particularly interested in myths.Â

This is why I feel Jimâ€™s â€œTwainâ€ is the best yet sculpted. Am I biased? Of course.

Final note: the twist in the torso is borrowed from Michelangelo’s David; nothing like an immortal reference. Invitation to Gloria Baker Feinstein’s opening this Friday.Â  Today she’ll be interviewedÂ on KCUR; will be featured in the Star and on Fox 4 later in the week.Â  Expect a strong turnout, resulting, we hope, in significant monies raised for the St. Mary Kevin Orphanage in Uganda.Â  Can’t imagine the realities these kids live with, but we do intend to help make things more bearable.

My wife and I stooped to renting Borat a week back.Â  Assessment?Â  The British have finally proven that theirÂ version of bad tasteÂ has sunk to the same level as ours (i.e. Jackass).Â  Other assessment?Â  Hilarious.Â

But if these numbskull Brits really did dupe the Romanian village,Â lying about their purportedÂ promises to improve the quality of life there, I wonder if they’ve since made amends.Â  If not, that’s unfortunate.Â  Karma always collects the bill in the end–usually tenfold.

Eating With The Bot, Jeffrey SassÂ

I met one of the most unusual artists while teaching my seminar in St. Louis.Â  Jeffrey Sass does these crazy works that start with a pinhole camera, he enlarges the image, then paints on it–often inserting a robot.Â  Great concept, great execution.Â

One of my favorite parts about teaching is the people I meet; the other part is the talent I encounter.Â 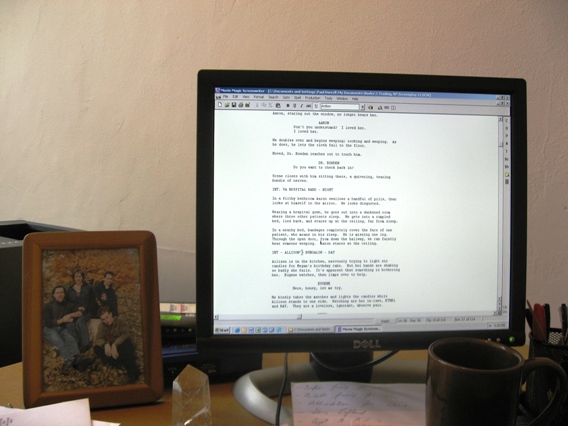 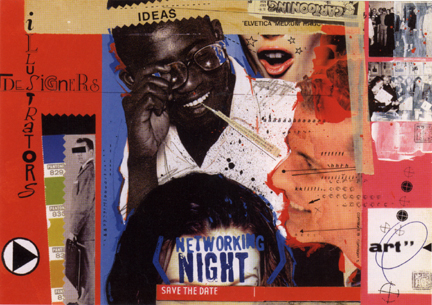 You will never advance your career as well on your own as you will if connected with influential figures and organizationsÂ in your region.Â  You don’t like socializing with them?Â  In the beginning, I didn’t either.Â  I considered myself too hip,Â and too literary, to bother.Â  Boy, did I haveÂ a lotÂ to learn.

Eventually, after realizing what an idiot I’d been (nothing new there), IÂ joined the Chamber of Commerce, made sure I got speaking gigs, then got appointed to various boards of relevant organizations.Â  Typically these would involve my serving as an art consultant for an economic development council, or a business group.Â  In addition, IÂ began spendingÂ a lot of time working with inner-city high schools, and their art departments, my theory being that there is as much talent in a ghetto as anywhere else, just not as much opportunity.Â  I don’t tend to publicize these programs, but word always gets out.Â  This brings me respect from the business community, which usually leads to more commissions, which allows me to keep devoting time to the inner-city kids.Â  What goes around comes around.

I cannot in oneÂ post explain to you all the particulars of networking, but I can tell you that if you can inspire genuine admiration and awe for what you do, that is a very good beginning.Â Â Simply follow up on it in a sincere way, making use of any contacts you might make, and returning the favor–whether in the art community, the business community, or both.Â  We all have things to lend one another; explore what you have to offer.Â  I assure you, you have far more than you might realize.Â

At the same time, if you can find an underprivilegedÂ group to work with that doesn’t have your opportunities, the rewards will be profound, and will often indirectly bring you opportunities you hadn’t foreseen.Â  How exactly does this work?Â  I don’t actually know, but it always does.

Upshot?Â  Don’t stay in the studio, bemoaning your lack of contacts.Â  Become proactive, get involved outside the immediateÂ area of your life,Â and join what organization you find relevant or worthwhile.Â  Great things can result, but only if you make use of the acquaintances you strike up.Â  Those relationships–and the relationship does come first–will help advance your career, often in surprising ways.Â  Surprises of that sort are a pretty damn good thing.

I’ll be teaching an all-day bootcamp for artists Saturday at Fontbonne, a university in St. Louis that was founded by a handful of French gals.Â  Has a great art dept.Â  I lectured thereÂ when the book firstÂ came out; now they’ve signed up for my seminar program.Â

In this, IÂ teach artists on how to structure a viable career–whatever one’s goals.Â  It involves a copy of Artist’s Life, an accompanying workbook, lunch,Â and a couple of Frisbee sessions.Â  Also abundant laughs, sinceÂ people learn best whenÂ spirits are high.Â Â We’re just now launching this gig, and IÂ expect to be teachingÂ it for several years.Â  Profs and art centers hire me because my area of knowledge is different from theirs.

Looking forward to it.Â  St. Louis is a great town, except for that Bud stuff.Â  Â 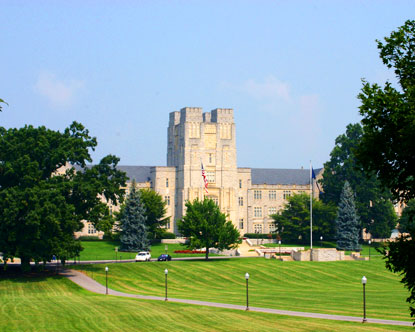 I first visitedÂ Virginia TechÂ in 1998, when I was in Roanoke on business, and had some time to roam the area.Â  Like many things in VA,Â Blacksburg was quaint and the campus charming.Â  The peaceful air of the place never would have inspired me to conceive of anything like Monday’s shooting.

The magnitude of thisÂ tragedy couldÂ  lead one into a discussion of handgun laws in America, their laxness, and the resulting millions of firearms that are privately owned.Â  But that discussion would do nothing to soothe the grieving, or assist theÂ recovering victims.Â  So I’ll get into none of that, but just express profound sorrow instead.Â  In the scope of this disaster, art consulting suddenlyÂ seems rather unimportant. 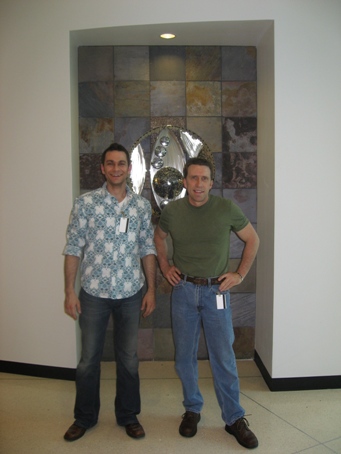 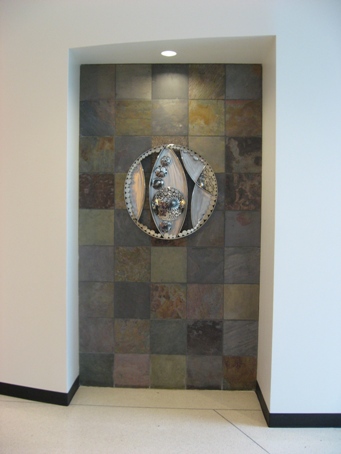 All right.Â  The Flap I mentioned last week where one of my installer’s was chucked off a job for being difficult has now been corrected.Â  I had to do the installation personally (like I have time), along with good old Jeremie Hoffman, but at least now I know it was done right.Â  Jeremie and I inÂ top photo; bottom shot sans clowns.Â  We’re installing five of these “Discs,” stainless steel, 120 lbs each.

As I mentioned before, the Regiers have two pieces on exhibit at the Boston Museum this summer. That’s coming a long way from the wheat fields of Kansas.