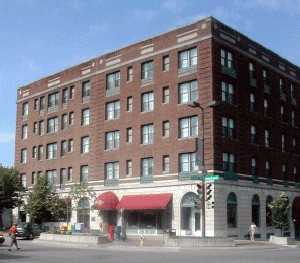 Dinner tonight with friends in Lawrence at the Eldridge House, the original of which Quantrill burned during his 1863 raid. It was rebuilt, many times. That border war between KS and MO has been much forgotten, but it was one bloody mother during the Civil War. That hatred lingered for a century. I remember it as a kid. Man, the stupidity of American violence.

Anyway we ate with the Dickeys. Steve teaches Slavic languages at KU; Janna, who is from Croatia, works as a translator. He and I met in college. Had the same mentor: an old gay dude we met in the sauna, who spoke 5 languages, and kicked our asses over several of them until we almost became as disciplined as he. Everyone should be so fortunate. Sam Anderson. Died in ’94. Steve and I still miss him. No, we were never his lovers, though he often wished as much. But half of life is made up of wishes unfulfilled–often for good reasons.

Restaurant filled with devotees of Jayhawk basketball–the very sort that Sam despised. He felt that the over-funded, and excessively emphasized, athletic programs were ruining higher education. I didn’t disagree then; I still don’t now.