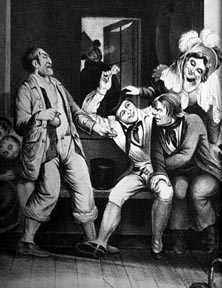 My wife and I threw a Christmas party for our block last evening. We do these things now and then; it keeps a neighborhood feeling like a neighborhood. That party ended at 8:00, and I could tell everyone had a great time.

Afterward we went to a different party, at the house of a friend. It was what I called a Bipartisan Gig, being equally made up of Democrats and Republicans–not that politics came up. In Kansas City everyone goes to pains to avoid those discussions.

The party was a hoot, the drinks good, the stories better. But somewhere around midnight, a self-proclaimed frat rat–albeit one of 45–began telling racist jokes to a small group of sympathizers. They all laughed covertly, but I heard some of it, and couldn’t help inserting myself where I obviously wasn’t welcome. Well, that’s why I did it.

Eventually this dude began exhibiting some sense of restraint, and backed off his line. But before he realized that I was the only one not laughing, it dawned on me how this sounded disgustingly similar to cocktail jokes I’d hear as a kid, in the 60s, when unwelcome business associates would show up at my parents’ parties. It also dawned on me how much work I have left to do as a writer. I mean you can hate guys like this–and he certainly was easy to hate–but your true job is to try to enlighten them. Sure, that ain’t likely to happen with his type, but that doesn’t excuse you from trying.

It was a good party otherwise.