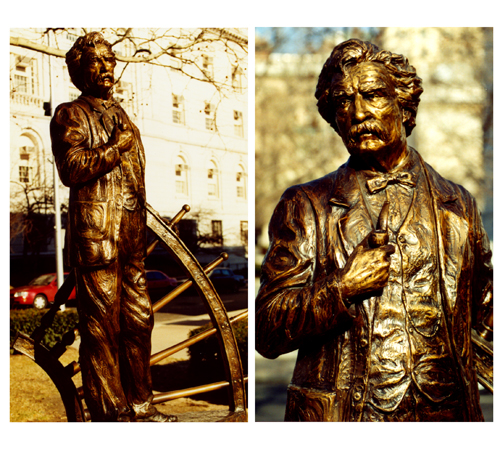 In 1992, when Jim Brothers was an unknown sculptor, and I an unknown art consultant, we were approached by a businessman from Hannibal. He wanted to commission a monument of Mark Twain. I was fully aware of Jim’s ability–that of giving a figurative sculpture real soul. But this guy didn’t know monuments from funny books, and didn’t care. He just wanted a steal. We were broke, so when he made us a paltry offer, we said what the hell and took it.

This dude had a bad vibe from the start. I knew it. Jimmy knew it. We chose to ignore it. But when push comes to shove, those things always surface. They did with this guy too. Meaning, once the sculpting was done and we required a downpayment, he just wouldn’t write the check. Jimmy got pissed, I got pissed, and we both told him to go suck an egg. Well, we put it a little more coarsely than that.  Look, a lot of great people come from Hannibal, and small towns in general; people with dignity, integrity, compassion.  But this yahoo wasn’t one of em.

Jim went ahead and had the piece cast, being as big on Twain as I.  Heck, we’re from his region.  Then I doubled the price, and some fine people with the City of Hartford, CT bought it. Why Hartford? Twain built his mansion there, wrote many of his novels there, raised his family there, and eventually went broke there (an artist’s story if ever there was). It’s where the Mark Twain Museum is located.

Unlike the yahoo, the Hartford folks recognized the brilliance of the piece: its candor, its subtle bitterness and yet also humor, its coarse texture singing of the man’s character itself. They had one hell of a dedication, and we had one hell of a party. Oh the stories I could tell about that. Moral? When the rich folks don’t know how to behave, find others that do. Patience pays dividends.

Not long after we finished that piece, the big commissions began to roll in–spurred of course by several thousand hours of marketing. Well, that was my job. Easy compared to Jim’s.