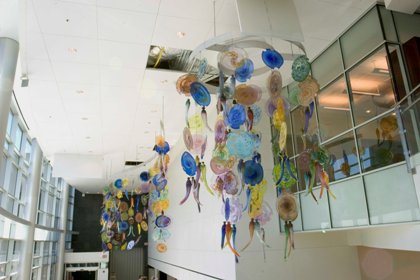 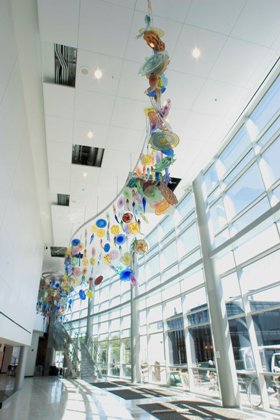 I know I’ve posted photos of this piece in progress, but these are better shots, since my assistant Sharon took them, and she’s better a far better shooter than I’ll ever be.  The work, by Vernon Brejcha and myself, was commissioned by the KU Medical Center.  It hangs in their new lobby, and man you should see it when the morning sun hits all that glass.  Better than a 1970s sunrise.  Grand opening was yesterday.

As you begin to assemble your career, or even if you’re deep in the midst of it, I feel it’s best if you acknowledge that your work will likely be rejected several times initially, and that finding the right gallery will likely be no simple task. Therefore, let me give you one piece of advice about rejection: get used to it. Let me also give you another: determine to persevere, no matter what.

Perseverance is the quality that enables you to handle rejection after rejection, then more rejection, then further rejection, then perhaps several more years of rejection, and still snap back. I’m not saying that those rejections shouldn’t depress or anger you, or at times make you want to abandon the whole bloody business. They should, and will. But you’ll have to persevere nonetheless–that is, if you want to succeed. You’re the one creating the work. You’re the one who has to believe in yourself. You’re the one who has to know whether your work is any good. If you do know this, and are certain of your artistic destiny, then no amount of being turned away should make any difference. Sure, you may punch a few holes in some walls before it’s over, but after the dust has settled, and you’ve mended your knuckles, go back out and make the approach again. And again and again. And again.Don’t get desperate. Don’t give in to despair. Listen to your inner voice, the one that has assured you about your work, and your place in the world, since the day you first began to create. Voices like that rarely lie (which isn’t to say that we don’t on occasion misinterpret them). Listen to the reassurance it gives you, assuming it does. As you listen, and as you prepare to send your work out once more, try to employ resiliency, combined with stubbornness, mellowed with humor, strengthened with discipline, bound with humility. And hell, enjoy yourself while you’re at it. You’re alive, you’re free to create, you’re work is maturing. If you learn to take the rejections well, you’ll gain strength and character from them. In time, this can lead to one formidable artist, and career. Decide that it will, and that the day is coming when the galleries will be happy to work with you. People respond well to confidence–which should never be confused with arrogance. Determine that the rejections will help build these things up in you; they can, if you decide to take them that way. They can also destroy you, if you let them. Don’t. In the end, the only person who truly has the power to destroy you, is you. That’s a tough one to remember, and a tougher one to practice, but from everything I’ve seen in the world, I believe it to be essentially true. You want an example of perseverance? George Bernard Shaw didn’t get his first significant play staged until 1897, when he was 41, and even then his career was several more years in taking off. Finally, by 1904, his talent was established, and he went on to become one the leading dramatists/philosophers of the 20th Century. What would have come of him had he given up? Very little. Please try to employ the same stubbornness. If you do, you’ll outlast the snobs, and the critics. 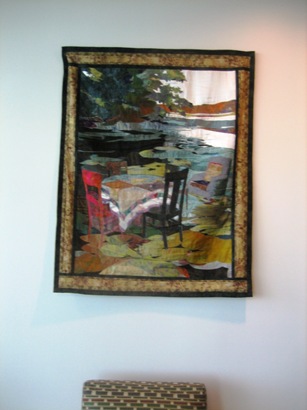 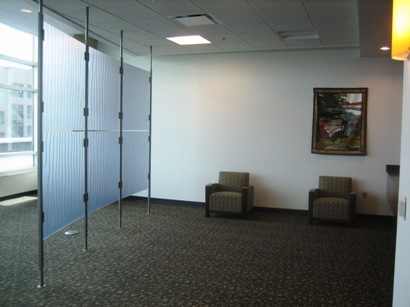 I love this fiber piece, Dining Out,by Annie Helmericks. So does one of my clients, theKU Medical Center. So they acquired it for one of the waiting areas in their new Cardiac Center–an enormous structure 5 stories high. Grand opening tomorrow. Note the blank wall to the left? Ah, that’s for another Louder, now in the works. She’s pleased.

What else have we installed here? Many pieces. I’ll show those over time. 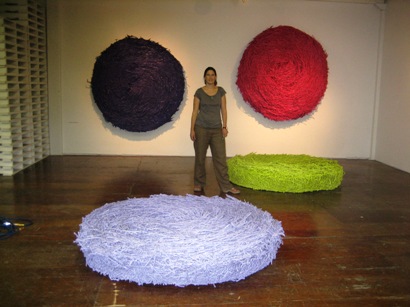 The shot above is of May Tveit in her studio, downtown KC, in the Review Building.  She does this incredible thing with straw bales, sectioning and then painting them in electric colors.  These are her larger works, though she also works in a variety of sizes.  Very pleasant woman; highly unique work.

Watched A Very Long Engagement with my wife Sunday night.  Love that movie.  Fascinated by anything about the Great War, and all the loves that were torn apart by it, although I’ve never known why.  My mama feels I may have passed then.  Maybe I did, maybe all of that is nonsense, but I’ve always felt at home on the fields of western France.  Haven’t a clue as to why. 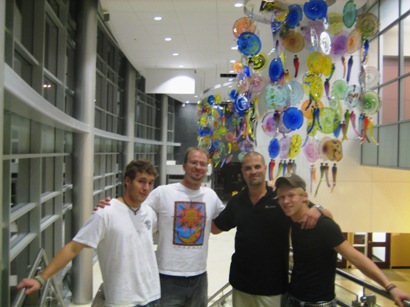 I was too swamped Friday to write in the Tips column, but Saturday will do just as well.ï¿½ The photo above is of my installation crew, after completing the huge Vernon Brejcha sculpture that I’ve blogged about a few times in the past week.ï¿½ Note their smiles.ï¿½ This is because I manage all my projects so that morale stays high.ï¿½ I consider that essential for any project toï¿½have the right vibe, which clients and casual viewers can sense, just as they can sense ineptitude.ï¿½ I also pay well, which I don’t doubt contributed to the smiles.ï¿½ I mean if I’m doing well, then everyone else does too.ï¿½ï¿½

This pieceï¿½was installed in the new lobby of a prestigious hospital.ï¿½ Yes,ï¿½it was aï¿½major project: 330 pieces of blown glass, overall sculpture weighing 2000 lbs., running for 90 linear feet.ï¿½ How did we land it, and the price we now command?ï¿½ By starting small years ago, as with all my sculpture projects, and all my sculptors.

In the beginning, we were forced to do commissions for a fraction of what we now charge, since in the early ’90s we weren’t yet established.ï¿½ Heck, we even lost money on a couple of the early gigs.ï¿½ Most artists do.ï¿½ But over time, I saw to it that the fees increased each year, until finally we were earning our due.ï¿½ It’s my job to ensure that the fees increase so we can all count on nest eggs, and help other people do the same.ï¿½ My clients never argue about this, because I always educate them on the process.

So if you want large commissions, you’ll likely have to start small, and cheap.ï¿½ If you manage to avoid doing this, please tell me how you pulled it off. 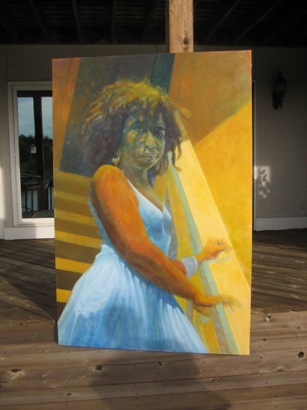 This piece, about 50% complete, is one that Lonnie Powell is executing for the foyer of one of my corporate clients.  Yeah it’s a bit unexpected: a large painting of an elegant black woman, who happens to have a real figure.  The piece will say many things when finished.  It’s also our way of assuring women that a real figure is fine, while anorexia is not.

I mean, it’s about time that confused chicks like Kate Moss, and the folks at Victoria’s Secret, quit skewing the international perception of what constitutes a healthy figure.  A real woman’s figure?  Go back to any Greek sculpture or Renaissance painting.  It’s all there, and it ain’t got nothin to do with Milan or Madison Avenue, who don’t know shit about a healthy life in the first place.  However they do know how to screw up girls, and how to make money. 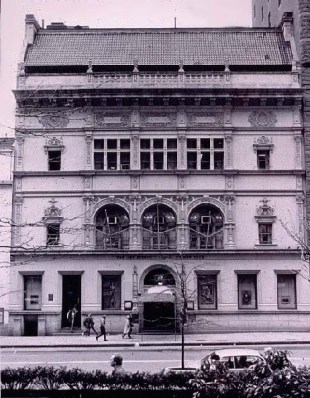 It was a year ago, more or less, that I gave a talk/signing at the ASLNY.  I also spoke at the Long Island Art League, the Westchester Art League, the Art League of Northern NJ, and the Jersey City Art League.  All those were cool, the audiences great, but what I dug most was the ASLNY.

The history of the joint itself is enough to knock you over, dating back to the 1870s, with instructors like Saint Gaudins and students like O’Keefe.  Hell, there was a Saint Gaudins in the front hall.  The crowd was large (200) and responsive, with only one obnoxious dude who got out of line in loud Brooklynese, and who I patiently answered in Missouri drawl.  He was satisfied, smiled, fell silent.

When it all was over, and the books signed, I went out onto the crowded streets and headed back to the Hotel Ford, my laptop and projector over one shoulder.  In my room I finished Everybody’s Game, a book that no NY agent has yet picked up, and in fact which I’ve quit submitting for the moment, being more focused on the screenplay.  No matter, a new agent is coming.  And I don’t think I’ll have to fire this one. 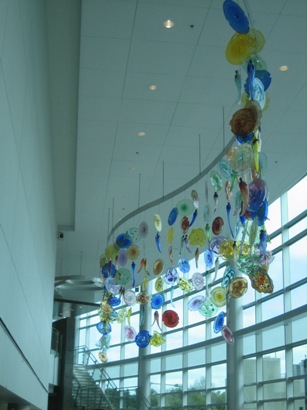 This shows the piece at about 33% of completion, with roughly 100 pieces of blown glass in the air.  Are we taking our time hanging it?  Well, you really can’t rush glass.  Besides, it gives the media more time to cover that way.

Finally completed the screenplay last week.  It’s now being reviewed by one of the major agents.  Not terribly concerned about what will happen from here forth.  Feel the timing and energy are right.

Process?  Wrote the novel that it’s based on six years ago.  The agent I had then, in NY, wasn’t able to place it: the timing wasn’t right.  So I shelved the thing.  A couple of years went by, and I adapted it to screen.  Got some good response, but I wasn’t happy with the piece, so I shelved it again.  Then last spring I saw a way to make it a much better story, relevant to the times, and yet hopefully timeless.  I launched into rewrite in May.

Drafted it twelve times, going through it carefully with three other professional screenwriters.  These people are jaded by Hollywood, slightly cynical, but quite talented.  That’s why I chose them: I knew they’d be hard on me.  They were.

Worked on the damn thing every morning and night, fueled by espresso, gratitude, and long hours jogging.  Worked on it in the gallery, at home, in Breckenridge, Moab, Denver, Hays, Eureka Springs, St. Louis, and everywhere in between.  Tried not to neglect my clients or gallery in the process; don’t think I did.

Now?  Each person who reads it apparently can’t put it down.  Thus far it’s received universal praise–which is humbling.  Did I do that alone?  Hardly.  I had a good team who kicked my ass when I got lazy about character arcs, dramatic peaks and storyline.  Then I had that one more indefinable thing, the muse or spirit that sometimes comes to us when we’re creating our work, guiding us through each step, pulling us out of the dead ends and sending us back down the pike.

Nah, I didn’t write this thing alone.  I had a lot of help, much of it hard to explain.  In the end, I think I just transmitted the ideas, action and drama I was given.  The comedy too.  Does that mean it will get optioned and produced?  Not at all.  But baby it sure does feel right.

My point?  For all you painters and sculptors struggling with your work, no matter what your process, I empathize with what you go through.  When you hit a dead spot, put your team together, and make sure they kick your ass.  If you don’t need it, so much the better. 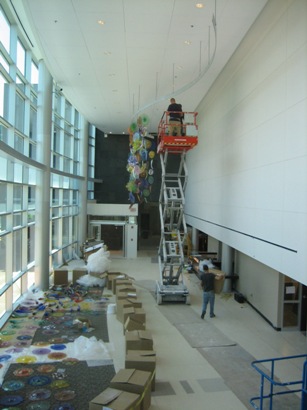 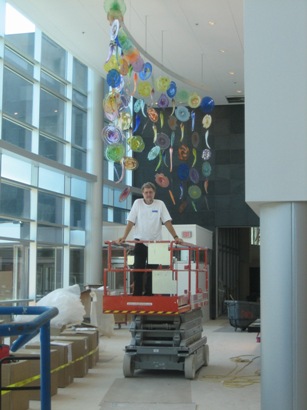 Project at approximately one-fourth of completion.  Artist on scissor lift, right-hand photo.  He’s in charge of blowing the glass, I’m in charge of armature and installation.  Works pretty well that way.